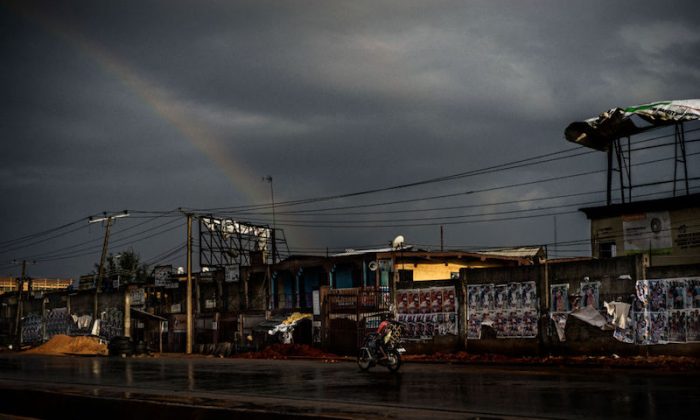 An okada motorcycle taxi driver rides with a customer in Onitsha, on May 30, 2017 at the end of a shut down day called in commemoration of the 50th anniversary of the Nigerian civil war. (Photo credit should read MARCO LONGARI/AFP/Getty Images)
Africa

Every few days, Tasiu Abdurrahman takes the money he makes from selling spices in Nigeria’s biggest northern city and buries it in his yard.

The 55-year-old closed his bank account eight years ago after growing disillusioned with standing in long lines for hours to deposit or withdraw cash. Abdurrahman is one of about 50 million of the unbanked in Nigeria, which despite having Africa’s largest mobile-phone market, is only just opening up to the technology to bring banking to its estimated 200 million people.

“My business partners need cash,” said Abdurrahman as he juggled two mobile phones at his ginger and tamarind stand, one of many dotting the streets in Kano. “If they all opened bank accounts, I would be happy to.”

Financial inclusion in Nigeria—which vies with South Africa as the continent’s biggest economy—has gone backward as the regulator blocked network operators from applying for mobile-money licenses that would allow cash transfers without the need for a bank account. Between 2014 and 2017, the percentage of banked adults dropped nearly 4 percentage points to 39 percent, while the sub-Saharan African average increased more than 8 percentage points to 43 percent.

The Central Bank of Nigeria this month announced it is not on track to reach its target of increasing financial inclusion to 80 percent by 2020. It is now reviewing the path it took in 2012 with a “refreshed strategy” and has also signed a cooperation agreement with the Nigerian Communications Commission to improve the penetration of financial services using mobile phones.

Less than 6 percent of Nigerians use their handsets to transact using mobile money, compared with 73 percent of Kenyans, where more than two-thirds of adults have a bank account, according to the World Bank. That’s even though there are more than two phones for every bank account in the West African nation.

“We’re taking baby steps when we should be running,” Yomi Ibosiola, an associate director at Deloitte Nigeria’s data analytics practice, said in an interview in Lagos, the commercial hub.

Cellular phone operators would invest more if they were allowed to lead the way, said Emeka Oparah, a spokesman for Bharti Airtel Ltd.’s Nigerian unit, which has 40 million subscribers.

“Right now, we’re only providing a platform for some people to use, if it becomes our business, we will invest in it,” Oparah said. The government should adjust its policies “if it wants to move very quickly.”

“When you open an account on your mobile, you can receive money but you cannot make payments,” Joshua said. “You need a Bank Verification Number to make transactions on that account you opened on mobile. Since the targets for financial inclusion are people that don’t have BVN already, some infrastructure needs to be deployed, like mobile BVN.”

There are efforts being made to remove those obstacles. One includes issuing identity numbers to 70 million people by the end of next year and pulling together the government’s various identity verification systems into a centralized database, which will make it easier for people to plug into financial services.

The central bank has said it’s taking inspiration from India, where a government-biometric database known as Aadhaar helped grow financial inclusion from 53 percent to 80 between 2014 and 2017, by cutting the cost for banks of identifying a customer.

Regulators in Nigeria also announced an initiative in March that will help to increase banking agents to 500,000 within two years, from 100,000, according to estimates by Enhancing Financial Innovation & Access, or EFInA, a research organization.

“One of the major issues for banks has been the cost of going to those unprofitable areas,” said Henry Chukwu, who focuses on broadening agent networks at EFInA.

Most of the biggest lenders are focused on business banking. Zenith Bank Plc, the country’s largest lender with the equivalent of $15.4 billion in assets, makes about 6 percent of its revenue from retail banking and about 58 percent from corporates.

There are not enough incentives for people to open bank accounts, especially among the poor, said Ameya Upadhyay, a principal in the investment team of Omidyar Network Fund Inc., which has invested in Pagatech, one of Nigeria’s first mobile-money providers, and another company that gives loans to small- and medium-sized businesses. About 87 million Nigerians live on less than $1.90 a day, according to Vienna-based World Data Lab’s World Poverty Clock.

“You have to create a ‘pull’ to these accounts and that happens when those accounts are meaningful to people’s every day lives,” he said, such as increasing the number of merchants with pay points or offering more insurance, savings or lending products. “People don’t eat accounts.”

Abdurrahman, the Kano spice merchant, agrees and remains unconvinced about using his phone to transact.

“I may decide to go for mobile money if more of my suppliers have it,” he said. “But for now I am very comfortable keeping cash at the shop to pay for supplies and keeping the rest at home.”