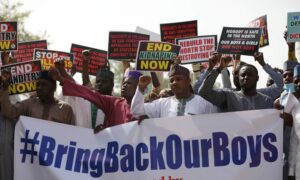 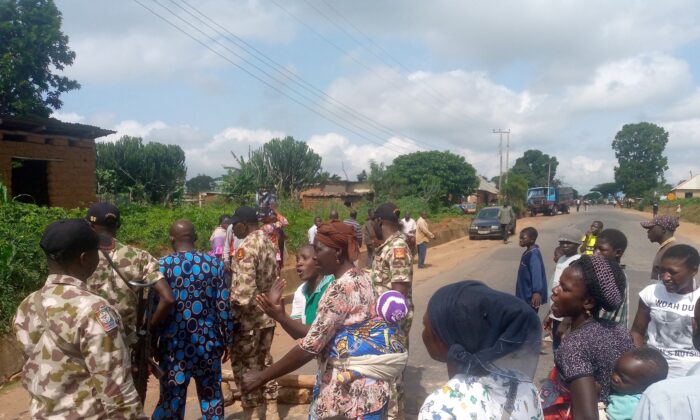 Women and children demand withdrawal of military after alleged shooting of two civilians, in conflict Zone south of Jos, Nigeria, on July 14, 2021. Protestors tell Military Officials who visit protest ground that they no longer trust Army to protect them. Masara Kim
Africa

JOS, Nigeria—Having buried their fathers, sons, and husbands who died as a result of terrorist activity in Nigeria, along with what they claim is complicity by the military, northern Nigerian women have taken to the streets in protest.

From January to June, 23 attacks by Fulani terrorists in Nigeria’s Plateau State resulted in 215 deaths, according to Mark Lipdo, founder of the Stefanos Foundation in Jos.

That appalling loss of life was partly what drove more than 500 women and children to march in protest on July 14, following the shooting of unarmed civilians by men in camouflage fatigues, who local residents believe were regular Nigerian army soldiers. The army has denied the allegation.

Bitterness and anger have driven the women to demand that the army leave Riyom County, 17 miles southwest of Jos, the capital of Plateau State.

Tabitha Gyang, a 60-year-old farmer, led the group of shouting women and children in a 12-hour protest against what they assert was the state-assisted slaying of unarmed civilians and the despoiling of farmers’ crops as soldiers stood by silently.

“A day after our crops were destroyed, we saw the soldiers guarding herdsmen passing through our community to their settlements, and when we complained that they do not give us the same protection when we need it, they said they are not here for us, that they are here to protect minorities—that is, the Fulani,” Gyang told Epoch Times.

The Fulani tribe has been linked to thousands of incidents of banditry and sectarian attacks; it’s present throughout West Africa and the Sahel, and it claims more than 12.8 million members in Nigeria alone, according to the CIA World Factbook.

Two members of Gyang’s family were killed by soldiers in 2018, she said.

The protest was triggered by claims that two unarmed men serving as volunteer watchmen in a local hamlet were shot to death by soldiers. This latest instance of troops apparently siding with terrorists makes the soldiers a threat to the community, Gyang said.

“We were in the backyard keeping vigil because we heard that attacks were being planned on the village, when two people wearing military camouflage approached. We thought they were coming to help us because we only had sticks and torch lights and whistles for alarm, but they opened fire on us, killing two of my colleagues.”

That was just one of more than 100 incidents of abuse allegedly involving local military, including extrajudicial killings, in the past three years, according to Yakubu Bawa, a local lawyer representing the victims.

“When we say 100 cases in the last three years, we are just being modest, and these cases range from extrajudicial killings to illegal arrests and unwarranted brutality by members of the armed forces,” Bawa told The Epoch Times.

Soldiers assigned to a peacekeeping mission in the region agreed to withdraw from the village on July 11, according to community leader Ezekiel Tengwong.

“The troops issued threats before evacuating, after villagers accused them of complicity,” Tengwong told The Epoch Times. “They threatened to return and deal with us since we said we don’t want them here because they are colluding with herdsmen to attack us and destroy our farm crops.”

In recent weeks, ripe crops of corn and maize on more than 50 local farms were mowed down by terrorists on the night of July 4 and in the following days, Tengwong said. The crops, owned by indigenous farmers and spanning more than 250 acres, have been despoiled in an effort to force local Christian farmers to evacuate the area. Photos of the destroyed crops were provided to The Epoch Times.

While local authorities pleaded for police to intervene, their distress calls were ignored during the destruction, Tengwong said in the Hausa language that’s spoken throughout northern Nigeria.

“We are here to protect both Berom and Fulani and indeed every other tribe on the plateau, but if communities say they don’t want us, we have no choice,” commander Maj. Gen. Ibrahim Ali told a news conference in Jos.

County Chairman Mafeng Gwalson said during a meeting with peacekeeping officials in Jos: “Less than half of Riyom County feels safe with the military.

“I have toured all the communities in Riyom and many of them prefer the police to soldiers because of these cases of violations that have persisted for years.”

Many attacks in the area previously linked to “military excesses and collusion with criminals” have eroded public confidence, he said.

Gyang Dachollom, a native of Riyom, told The Epoch Times that he lost trust in the military after being shot by soldiers at a military checkpoint in 2013.

“With what happened on Feb. 13, 2013, in Fang village of Bachi District here in Riyom County, each time I see anything relating to the military, I get frightened,” Dachollom told the meeting of local officials with the STF, a combined force of military and police set up to curb ethnic and religious violence in Plateau State.

“Five of us were shot at a military checkpoint. I survived with a bullet wound in my stomach, but while crawling to safety, one of [the soldiers] came close to me wearing khaki and a helmet and still shot at me. I rolled on the ground as he fired his gun on rapid, and when I got a cover, I ran, staggering before I called for help.”

Ali on July 15 conceded that there were “bad eggs” within the task force in Plateau State, although he denied that the military had fired on unarmed civilians. He countered that civilians could have used military identities to cover crimes.

“There are criminals in every organization. But is it not possible for a civilian to get a military uniform and ID card, to go and attack, and put the uniform there? Is it not possible?” Ali said. “It is very possible, so that he will bury his tracks. So that nobody will ever suspect him. People do that. So that is the reason why you should not just conclude that it is the military that did that.”

Ali publicly apologized to Dachollom during a news briefing on July 15 at the STF headquarters in Jos. Ali had denied violations by the military until Dachollam appeared at the meeting along with Gwalson.

Chris Kwaja, an adviser to the United States Institute for Peace, said: “Militarization of civilian communities is increasing the tendency for crimes. Soldiers are now taking over the work of the police whose duty it is to handle internal security affairs.

“The consistent flooding of civilian communities with military personnel, like in the case of Plateau State, for over two decades now, is militarizing the psyche of the civilian populations.

“Even little children now know an AK-47 rifle. Civilians now keep and use these weapons unchallenged. In other [regions], you don’t see a soldier in uniform likely. You could see a sidearm but certainly not assault rifles.

“But what is happening today is redefining the society and that is giving room for criminality to thrive. In the first place, when these things happen and are not investigated, whether it is the soldiers or criminals that are behind it, the failure of law enforcement to bring the perpetrators to justice puts them at fault.”

In 2018, former Nigerian Defense Minister Lt. Gen. Theophilus Danjuma told the Premium Times that the military was “colluding” with herdsmen to attack communities.

“[The military] collude with the armed bandits to kill people, kill Nigerians,” said Danjuma, whose home state of Taraba was the scene of a series of armed attacks by suspected Fulani herdsmen.

A cellphone believed to belong to a Fulani terrorist found at the scene of a massacre in Kaduna State, which adjoins Plateau State, on April 26, 2020, gave credence to Danjuma’s claims. Among the 26 phone numbers saved to the phone were direct cellphone numbers for Nigerian army and police officers—the very people who should be hunting terrorists, Zenger news reported.