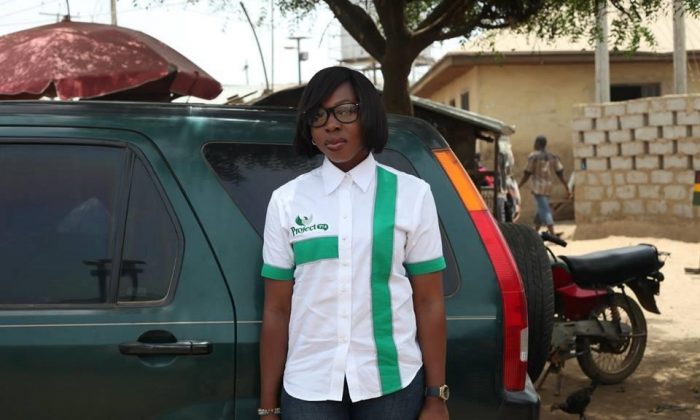 Nigerian Voices on the Chibok Schoolgirls’ Kidnapping by Boko Haram

Nearly two months after the abduction of more than 200 schoolgirls from Chibok, Borno State, Nigeria, on April 14, they have not yet been found. The terrorist group Boko Haram claimed responsibility. President Goodluck Jonathan authorized war on the terrorists, but the army is reluctant to wage attacks to find and release the girls. While the government is still searching for a strategy to bring back the girls, Epoch Times asked Nigerian people how the kidnapping of the schoolgirls represents other social problems in their home country.

The missing Nigerian girls are a clear representation of bigger social problems in Nigeria. There is a challenge regarding the issue of patriotism from the Nigerian citizenry towards their country. The love for the country is oftentimes expressed between people of the same tribe, religion, or village rather than towards the Nigerian nation. Nigerians need to look beyond the little diversities in culture, embrace the idea of the Nigerian nationhood and cultivate the sense of self- responsibility towards the development of our nation. This will enable us to take pride in our nation and fiercely protect our country, Nigeria. True patriotism will eliminate any disconnect between the government and the governed and embrace collaboration between the leaders and followers. If, I as a citizen, understand that the development of my country is my obligation, I will not protect a criminal act just because the perpetrator is from my village or we share the same religious beliefs. Rather, I will work with my government to effect the change I desire for my country.

The kidnapping in Nigeria is just a reflection of the decay that has become synonymous with the society. Deep at the root of it all is corruption with the highest form of impunity. From the kidnapping, to the response of those in authority, the world can see expressly the attitude that has affected the quality of life of the simple Nigerian. If it wasn’t for social networking, this issue would have gone the same way several others have, unresolved and no one caring to do the right thing. Take the society as an example, each household has to provide its own electricity, water as well as security making you wonder what the role of government is. This is not a poor nation; Nigeria is blessed with numerous natural resources but people cannot enjoy the basics of life, yet our public officials belong to a class of the richest people in the world. It is also sickening to see the ruling party and largest opposition turn this into an opportunity to throw political punches. More than ever, there has been no better time for Nigerians to speak with one voice and root out the rot in our country.

The kidnapping of the Chibok girls by the Boko Haram sect, in my opinion, is one of the evil effects of corruption. Corruption in Nigeria today is both systemic and endemic. Failure of governance is most prominent in the northeastern part of the country where there is abject poverty and people lack basic amenities. Millions of school-age children are left to roam the streets as beggars. There is an army of unskilled and jobless youths without hope for tomorrow, while the ruling class continues in its primitive acquisition of wealth. The imbalance and injustice is unfortunately attributed to the influence of Western education.

This issue was started by the opposition parties who said if they fail the election, the country would be ungovernable for any other person. This is what they are doing until today. They said that the leadership of their country belongs to the Muslims; they started destroying every Christian gathering, bombing churches in the northern part of the country, and now kidnapping state schoolgirls just to make sure the presidency is not at rest. Boko Haram has backup. Some of the opposition leadership was indirectly saying Christians should leave the northern part of the country.

We Nigerians have a huge social problem. Maybe it stems from the fact that although we are all the same skin tone, our blood runs deeper in the community we are born in. Loyalty to the nation is so expensive but cheaper when it comes to tribe and religion regardless of what it entails. Our politicians know this and have exploited it for their own gain. When Boko Haram started [their activities], rather than nipping it in the bud, it was politicized and each party group had a field day criticizing the other. Now the group has gone out of hand; the same politicians can’t even come together to address the insecurity in this country. Truth be told, Nigerians believe every word of the threats issued by Shekau [Boko Haram’s leader] but not the promises made by the president. Our politicians are full of words and stolen money. With our oil revenue, poverty, and illiteracy yet to be curbed, it gives many underprivileged a tool to hide under religion and commit atrocities.

Isa Badamasi, 36, entertainer, Nigerian, based in the United Kingdom

The kidnapping of the schoolgirls is a clever technique used by politicians to get people’s attention away from all other shortcomings of the present governmental regime. A very good cover and distraction over and away on an ever-growing problem of poverty, insecurity, lack of jobs, lack of infrastructures, and basic amenities like hospitals, medicine, water, and energy. No transport and bad road networks are all in the decline phases, topped up with lack of communication, creamed with the lack of youth empowerment.

The president made his speech addressing the whole world with a very big smile on his face saying it’s not as bad as the media makes it sound to be. A Western leader would not address the situation to the world in a similar manner. This is one of the reasons why I believe the kidnapping of the Nigerian girls is a mere representation of other bigger social and political problems in Nigeria, which the government is desperately trying to hide.

The current activities of the dreaded militant group Boko Haram could be likened to an act of civil war. But still, the kidnapping of over 200 girls represents a society that is quite insensitive to the welfare of youths. This really poses a great threat to the Nigerian society—what do you expect of a society that is witnessing a break down of law and order? Abduction or kidnapping has been one of the social vices rocking the country, although it hasn’t been that rampant and so far has always been put under control. But as it is now, it appears the country might be witnessing it at an increased rate, if proper care is not taken. It is an unfortunate situation, I must say.

The Boko Haram issue is a political issue dressed in religious clothing, since that’s the only means they can get public sympathy.

There are too many conflicting reports and comments about the Chibok girls’ kidnapping. The stories are contradicting and implicating. Personally I don’t think there was any kidnapping but a scripted act geared towards discrediting the president before the 2015 election. They have been sponsored by northern army big boys, who are now politicians. They’ve been engaging in arms deals and betraying the military. If the pictures painted about the Boko Haram militants as a dreaded armed group are true, how come these little girls are escaping from their hideout and nobody can locate their way back to the camp? Does it mean that they can’t secure their hostages, to get what they want from the government? The school authorities can’t give complete information as to the numbers of girls kidnapped and we’ve not seen the parents of the kidnapped girls. Why is everybody blaming the president and no one is blaming the governor of that state? Why are the little girls escaping in batches and the soldiers can’t get to where they are? Let’s face the fact. The whole Chibok abduction is a scam geared towards deceiving Nigerians for political gains by some northern elite who thinks they have been short changed or neglected in the political landscape of Nigeria and this is an avenue to get themselves back in power by destroying the image of the president, to unseat him in the 2015 election.

The case of the abducted school girls has shown how negligent our government is, how they react to situations that are detrimental to the populace, and how they spur to action when the torch-light of the international community is beamed on them. It’s so unfortunate that every sector of our economy has been politicized. Education, power, agriculture and other sectors are on the decline; corruption is at its most prevalent state, even the security situation in the country has been compromised, hence no one feels safe anymore. And instead of our leaders taking the right steps to tackle all of these issues, they politicize it by putting the blame on the opposition.

In a country with a lowly educated population, epileptic power supply, very high cost of living, and millions of unemployed youths; it is only obvious that the masses will turn to social vices. And although the insurgents in the north are fighting for a cause (an unjust cause), the negligence of our government towards dealing with the Boko Haram terrorists, when they first came to the limelight, has made the group rise to this state of impunity.

The issue of the abduction of the girls is a very appalling situation in the country, as it has left families of the girls heartbroken and has also left a heart touching impact on the general public in the country and globally. It has also made the citizens lose trust in the government and administration of the current president Goodluck Jonathan. Incessant protests, demonstrations, and riots have occurred in several parts of the country. Although many negotiations have been done between several individuals and the terrorist group Boko Haram, they’ve refused to release the girls. According to their leader, “we have the intent of converting the girls to Muslims.”

In the past years, people were into politics for petty things like token amount of money, small contracts, and recognition. It’s just too pitiful that our youths are forced to partake in political games nowadays all because of what will become in the nearest future. Most youths are jobless and think the only means to get employed is through politics. Most elderly men and women are not just into politics, but also interested in getting jobs for their children. It saddens my heart that our politicians are playing on our weakness; this party will promise employment opportunities for the youths, another will promise the same without fulfilling the promises. We have been held for ransom but the anxiety for getting employed clouds our sense of reasoning and our political approach. Today is the right time, tomorrow might be too late to stand against injustice and unite to install the real government of the people. May God help the youths to know the truth.

The abduction of over 200 girls is neither the problem nor the causal factor of economic, political, and social ethno religious divisions in Nigeria, but rather an effect. The genesis of the Boko Haram issue is traceable to long-term neglect of education, employment, insensitivity to people’s needs, greed of our leaders (past and present), and abuse of power. The innocent girls are just victims of circumstances, and we pray and hope that very soon they will come back alive and safe.

Those factors have given the wicked Boko Haram hoodlums opportunity to abduct and stand firm leaving the masses and government at their messy mercy. Worst still, the issue is going commercial—in the southwest state of Osun, a pastor arranged for other members of the church to disguise themselves as Boko Haram members and disrupt the church service with fireworks, but they were caught and are currently in the police station along with the said pastor.