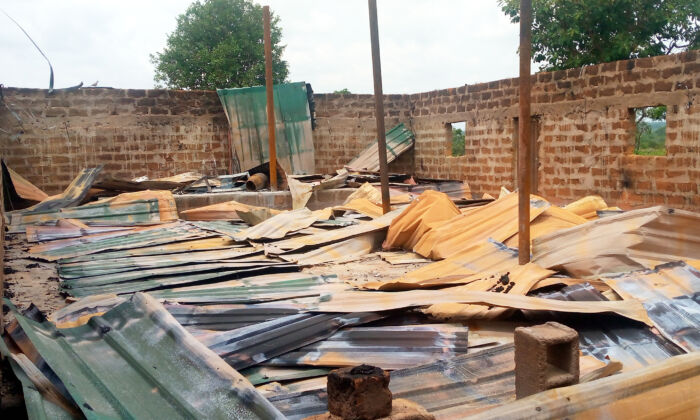 The remains of Sani's church, which was allegedly bombed from the air by people in a helicopter. (Courtesy of Mazara Kim)
Africa

It was a sunny Sunday in Maikori, a small farming town in the south of Nigeria’s Kaduna state. Rev. Denis Sani, the pastor of the evangelical church Winning All as well as a leader of a 50-man civilian watch unit, was giving a sermon.

A few minutes before noon on June 5, Sani got news he dreaded. A band of 200 armed terrorists had swarmed the nearby town of Dogon Noma, which meant Maikori was next.

After dismissing the congregation of 400 worshippers, he mobilized his team at the northern entrance of the thickly forested town where the terrorists were expected to storm in on motorbikes.

At 12:30 p.m., a convoy of more than 70 motorcycles—with three assailants to a bike—arrived at Maikori after leveling Dogon Noma and two other settlements in their path.

Sani’s team was outnumbered by 4 to 1. It was their first time fighting against such a force armed with sophisticated weapons.

The team hid behind tall trees and grasses near the approach to the village and fought with their hunting rifles and homemade short guns. Their goal was to slow the invaders enough to allow women, children, and the aged to evacuate.

The ensuing firefights kept the terrorists—who didn’t anticipate resistance—from advancing for several minutes. But at about 1 p.m., a silver-colored helicopter appeared overhead and began shooting at the defenders.

The terrorists—advancing under the cover of the fire from the helicopter—shot at fleeing residents, including women and children. They looted and burned homes.

An 18-year-old resident named Shadrach Joshua, who was running with a 2-year-old child on his back, was hit in the leg by the gunfire from the helicopter.

At the end of the four-hour raid, two members of Sani’s watch team were among 33 people left dead in the attack.

The attack was little noticed by Nigerian media, although it took place at the same time as a brazen mass murder 349 miles away at a Roman Catholic church in Ondo state. The murder of 40 congregants by three terrorists grabbed the attention of the world.

Both incidents represent the persecution of Christians in Nigeria that many observers have called a “Christian genocide.”

They were closely followed by the murder of three worshippers and the kidnapping of many others during a church service in Kajuru on June 19.

U.S. Rep. Chris Smith (R-N.J.) has asked Victoria Nuland, the U.S. undersecretary of state for political affairs, to engage the government of Nigeria on the issue of Christian persecution.

“Previously, Ondo had not seen major militant activity, and the attack indicates the southward migration of terror towards Christian-majority regions as well as Nigeria’s oil-producing areas,” Smith said.

“This is of great concern, especially given the outsized importance of Nigeria throughout all of West Africa,” Smith said in a letter to Nuland.

According to a statement on Smith’s website, the letter was in response to the State Department’s decision to omit Nigeria as a Country of Particular Concern in its annual International Religious Freedom Report released earlier in June.

That was despite the widespread religious persecution plaguing the country.

The statement laments that in 2021, more than 4,650 believers were killed in Nigeria, accounting for nearly 80 percent of Christian deaths worldwide, according to the religious freedom watchdog Open Doors International.

“An air force helicopter [under Operation Whirl Punch] dispatched to the area intercepted the bandits at the last location [Ungwan Maikori] and engaged them as they retreated, before the arrival of ground troops,” Aruwan wrote.

But Sani told The Epoch Times that no military personnel were seen in the town during the four-hour attack.

“To this day, no soldier or government official has visited this village,” he said, noting only civilians were attacked by the helicopter.

“It was around 1 p.m. that the helicopter came and started shooting at us, following even women and children who were running in the bush, with gunfire that the terrorists gained access and started burning our houses,” Sani said.

From a safe distance, Shehu Mu’azu—a previously displaced farmer from the nearby village of Karamai, who now lives in a grass tent two miles south of Angwan Maikori—could see the helicopter shooting at civilians as they fled from their burning houses.

“It flew around the village, back and forth, while the bandits were burning houses and shooting people,” Mu’azu told The Epoch Times.

But several days after the raid, the military has yet to report any arrests. Sani also confirmed no terrorist was killed by gunfire from the helicopter.

“Not even the trace of their blood was seen on the ground,” he said.

The attack has stirred calls for an investigation of possible military complicity with terrorists in the state.

“If the helicopter was from the government, how come they shot the villagers and not the attackers?” Yakubu Umar Barde, a member of Nigeria’s House of Representatives, told The Epoch Times by telephone.

“If they only mistook the victims for the attackers, how come they bombed a church?” asked Barde, who represents Kajuru.

“We have reports from the villagers saying they used to see helicopters landing in their villages, supplying something they don’t understand and flying back at midnight,” said Barde.

According to Aeroaffaires, an international aviation company that runs helicopter chartering services in Lagos, Nigeria, the cost of hiring a helicopter ranges from $1,255.13 to $4,183.78 per hour, depending on type and size.

But terrorists are able to afford them due to their wide financial networks, Barde says.

“These bandits have their masters in the cities. The money [they get from kidnapping] gets back to the cities. If the government is serious, this can be investigated. But they are being treated with kid gloves.”