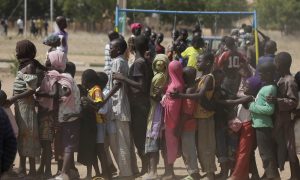 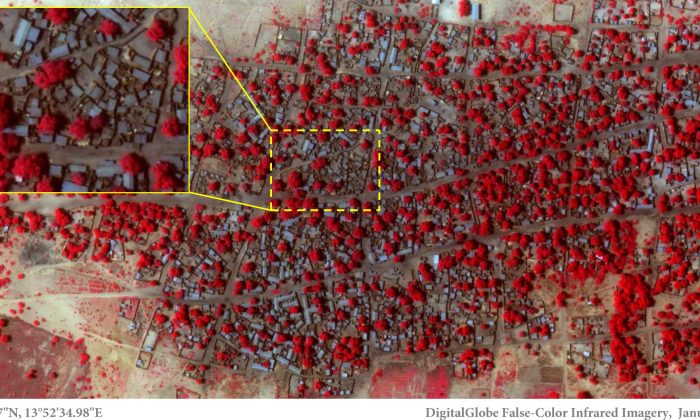 This Satellite image taken on Friday, Jan. 2, 2015 and released by Amnesty International of the village of Doron Baga in north-eastern Nigeria, shows before it was allegedly attacked by members of the Islamic extremist group Boko Haram. Satellite images showing widespread destruction in two Nigerian towns that were recently attacked by Islamic extremists, were released Thursday Jan. 15 by an international human rights group Amnesty International released detailed images of Baga and Doron Baga, taken before and after the attack earlier this month, that show more than 3,700 structures were damaged or completely destroyed. The images were taken Jan. 2 and Jan. 7, Amnesty International said. Boko Haram fighters seized a military base in Baga on Jan. 3 and, according to witnesses, killed hundreds civilians in the ensuing days. (AP Photo/Micah Farfour, DigitalGlobe via Amnesty International)
News

MAIDUGURI, Nigeria—Large areas of Nigerian towns attacked by Islamic extremists from Boko Haram were razed to the ground in a widespread campaign of destruction, according to satellite images released Thursday by Amnesty International.

Amnesty said the detailed images of Baga and Doron Baga in Borno state, taken before and after the attack earlier this month, show that more than 3,700 structures were damaged or completely destroyed.

Jonathan’s office said in a statement that the president traveled to Maiduguri in a “surprise visit” on Thursday and met troops involved in the fight against extremists. He also visited hundreds of civilians who were staying in a camp in Maiduguri after fleeing Baga, where Boko Haram fighters overran an army base and attacked civilians.

Baga Devastated: A Horror Story, However Many People Died

Jonathan, who is running for re-election in February, has not visited the northeast since a state of emergency was imposed in May 2014.

The satellite images released by Amnesty International were taken Jan. 2 and Jan. 7, the rights group said. Boko Haram fighters seized a military base in Baga on Jan. 3 and, according to witnesses, killed hundreds of civilians in the ensuing days.

The group said interviews with witnesses as well as local government officials and human rights activists suggest hundreds of civilians were shot; last week, the human rights group noted reports of as many as 2,000 dead. The Nigerian military has cited a figure of 150 dead, including slain militants.