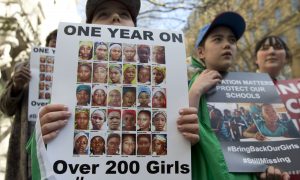 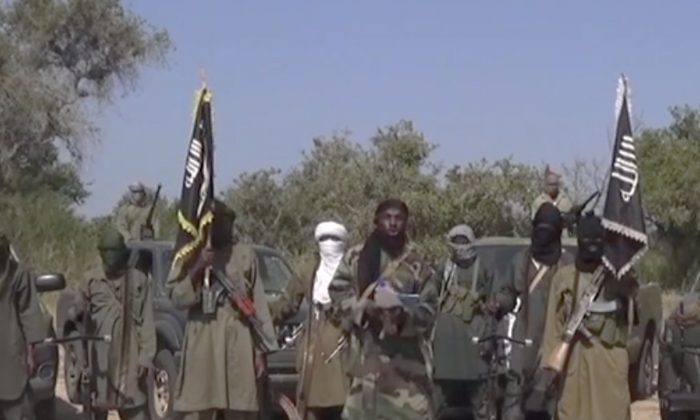 This Friday Oct. 31, 2014 image taken from video by Nigeria's Boko Haram terrorist network, the leader of Nigeria's Islamic extremist group Boko Haram, center, has denied agreeing to any cease-fire with the government and said Friday more than 200 kidnapped schoolgirls all have converted to Islam and been married off. (AP Photo)
Africa

LAGOS, Nigeria—Nigeria’s new President Muhammadu Buhari is set to make his first official visit to one-time enemy Cameroon Wednesday to ease tensions and bolster support for a multinational army to fight the Boko Haram uprising that has spilled across borders.

The long-anticipated diplomacy comes eight weeks after Buhari visited neighboring Niger and Chad. All three countries are contributing to the force.

Hard feelings date back to a 1980s land dispute. More recently, Nigeria accused Cameroon of doing little to prevent Boko Haram from using their territory as a refuge.

Cameroon saw Buhari’s failure to visit earlier as a snub, and its president, Paul Biya, didn’t to attend his May inauguration.

“The two countries are intertwined and have no choice but to have a relationship to deal with Boko Haram,” said Chris Fomunyoh, an analyst with the Washington-based National Democratic Institute.

On Monday, Boko Haram killed at least 29 people in two Christian villages in northeast Nigeria, while in Cameroon, suicide bombings claimed 60 lives over the past week. Some 20,000 people have died in the 6-year-old uprising.

Cameroonian authorities Sunday ordered the closure of mosques in the north and banned child beggars after one attack involved a 10-year-old posing as one.

The insurgency has consistently rebounded after major setbacks, however. Multinational troops earlier this year forced the extremists out of towns they had held, but now, Nigerian politicians say Boko Haram is again seizing territory.

Buhari has said an 8,700-strong multinational army will become fully operational next month, delayed for months by lack of funding dependent on a U.N. Security Council resolution.