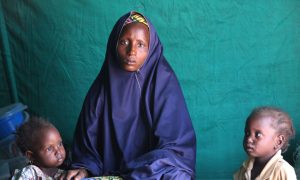 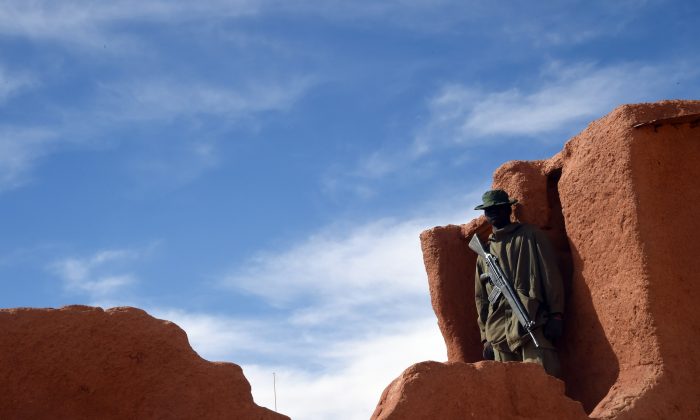 A Nigerian soldier stands guard in Madama near the border with Lybia on Jan. 1, 2015. (Dominique Faget/AFP/Getty Images)
Africa

Nigerian Defense Chief: Military Base in Hands of Extremists

ABUJA, Nigeria—Nigeria’s chief of defense staff acknowledged Tuesday that the headquarters of a multinational military force on Nigeria’s border with Chad has been seized by Islamic extremists.

Air Chief Marshal Alex Badeh told reporters that only Nigerian troops were at the key base at Baga, on the shores of Lake Chad, when insurgents attacked Saturday because Niger and Chad had withdrawn their fighters from the base.

“Chad had people on their own side but I believe they have withdrawn. Niger had people with us. They too withdrew, and left Nigeria only at the Multinational Joint Task Force headquarters,” Badeh said at a briefing after a security meeting with President Goodluck Jonathan.

A senior military officer in northeast Nigeria said troops from Niger, Chad and Cameroon withdrew from Nigeria months ago. He spoke on condition of anonymity because of the sensitivity of the issue.

The countries are all part of the Multinational Joint Task Force that was created a year ago by countries bordering Lake Chad to combat growing terrorism arms trafficking and cross-border attacks.

Badeh denied rumors that Chad and Niger had also pulled out of the task force.

He refused to say what happened during the attack, admitting only that there was one.

Witnesses said troops fought valiantly for several hours before running out of ammunition, when they fled alongside civilians.

Asked if the military would retake the base, Badeh said “Why not?” but refused to say any more.

Thousands of people have been killed and about 1.6 million driven from their homes in the 5-year-old Islamic uprising in Africa’s most populous nation and its biggest oil producer.

From The Associated Press. AP writers Michelle Faul in Johannesburg and Haruna Umar in Maiduguri, Nigeria, contributed to this report.