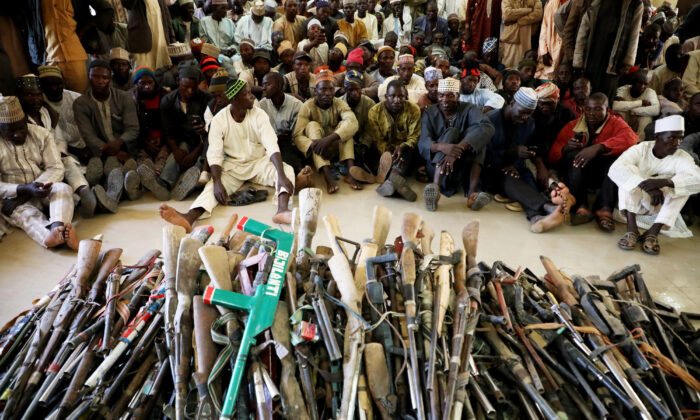 Members of the Yansakai vigilante group sit inside an auditorium at the Zamfara state government house as their members surrendered more than 500 guns to the governor Bello Matawalle, as part of efforts to accept the peace process of the state government in Gusau, on December 3, 2019. (Kola Sulaimon/ AFP via Getty Images)
Africa

Nigeria Might Be Next Afghanistan Due to Crisis of Lawlessness, Governor Says

Unless the rule of law returns to Nigeria soon, the nation will collapse into a general civil war reminiscent of Afghanistan, Benue state Gov. Samuel Ortom told The Epoch Times in an interview.

“From what happened in Afghanistan, we see that one day, the president will run away from that [presidential] villa and hand it over to terrorists,” Ortom said, alluding to the departure of Afghan President Ashraf Ghani in August 2021 as the Taliban army closed in on Kabul.

“The president’s own guards recently were attacked and killed,” Ortom said.

As The Epoch Times has reported during the past 18 months, terrorists in Nigeria have derailed passenger trains, abducted whole student bodies of colleges, and broken into maximum security prisons to liberate their jailed comrades with apparent impunity amid a limited government response.

Ortom says that a national security summit that includes all 36 of Nigeria’s governors is urgently needed.

“But the government is afraid of public exposure,” the outspoken governor said.

“If nothing happens to change the situation in the next five years, there will be no more Nigeria,” Ortom said. “There will be lawlessness everywhere and anarchy, and it will be terrible.”

Numerous experts, among them former U.S. Ambassador to Nigeria John Campbell, have judged Nigeria to be a failed state.

The crisis of lawlessness because of jihadist insurgencies and rampant kidnapping for ransom has overwhelmed the understaffed Nigerian police, Ortom said.

While oil-rich Nigeria is the wealthiest and most populated country in Africa, it’s the most dangerous country in the world for Christians, according to Open Doors, an organization that advocates for persecuted Christians.

Gun-control laws enacted by the federal government prohibit private ownership of firearms; however, the herding peoples in Nigeria carry assault rifles with impunity, and in response, Ortom has demanded a government exemption for his volunteer guards.

“I have reported to the federal government the invasion of terrorists into my state and have requested licenses for our community volunteer guards to carry AK-47 rifles,” he told The Epoch Times. “I have yet to hear back from them after months.”

Ortom, a devout Pentecostal Christian leading a majority Christian state, has clashed with the administration of President Muhammad Buhari, a Muslim and a leader of the powerful Fulani tribe that claims as many as 20 million members in Nigeria.

In 2017, Ortom initiated a “no open grazing” law in Benue that has infuriated the cattle-herding Fulani people. As many as 20 state governors currently support similar laws, Ortom says.

Benue state has trained 500 volunteers to defend rural communities from terrorist attacks by perpetrators who police spokesmen refer to as  “terrorists,” “bandits,” or “unknown gunmen.”

The volunteers in Benue are equipped with vehicles and uniforms and “legally approved weapons,” although the weapons they purchase for use are “pump action shotguns,” according to Ortom. He says he would prefer to equip them with assault rifles equivalent to those used by the terrorist attackers.

The U.S. Commission on International Religious Freedom (USCIRF) weighed in on Sept. 6 with prescriptions to stem Nigeria’s spiral into chaos.

Poor governance and a complex set of “drivers of violence” are behind the loss of life, according to USCIRF, which recommended that Washington restore the designation of Nigeria as a “Country of Particular Concern,” or CPC, for tolerating egregious violations of religious freedom.

USCIRF also called for “a briefing from the U.S. Department of State to explain how it is implementing policy on Nigeria to promote religious freedom and report on the effectiveness of such efforts.”

An updated version of the USCIRF report calls for the appointment of a special envoy who could mobilize U.S. government agencies to do for Nigeria what other envoys have done for other regions of conflict in Africa.

“USCIRF is making recommendations at a 60,000-foot level, but you will never find out where the U.S. aid money goes, and what they are using it for,” he told The Epoch Times.

“But the Department of State is throwing money at a problem, but not getting down to the grassroots level to see how it is spent, and which nonprofits [are] on the ground,” he said.

“Peace-building programs in conflict areas that cannot be monitored by U.S. government employees because the locality is too dangerous need to be reevaluated,” Destro said.

The International Committee on Nigeria (ICON) hailed the call for a special envoy.

“We believe that a special envoy, working directly with the various agencies of the U.S. government alongside the Nigerian government, would improve the veracity of reports of human rights violations, ethno-religious violence, insecurity, corruption, and inflation,” ICON Executive Director Kyle Abts said.

“Additionally, the recommendation to condition aid is welcomed as long as it encourages civil society activities that promote religious freedom and access to justice for the victims.”