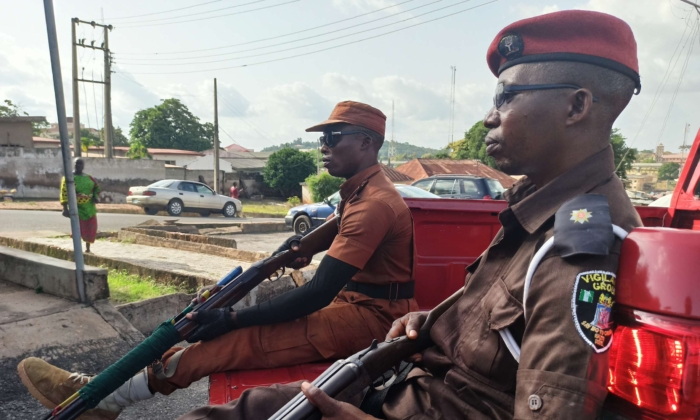 By dusk on Jan. 30, Motunrayo Shittu, 30, held her infant and fretted that her husband, who had phoned an hour earlier, hadn’t returned as promised. After several hours, she took her worries to bed with her three children.

The next morning, her cell phone lit up with a call from her husband, Bamgboye Adegoroye, former chairman of the Ilejemeje Council of Nigeria’s Ekiti state. In horror, she heard the gruff, unfamiliar voice of an abductor speaking shredded English to demand a ransom of 30 million naira—the equivalent of $73,000.

Shittu, like thousands of citizens caught in the crosshairs of organized crime gangs in Nigeria’s six southwestern states, called in the help of a paramilitary group created just two years ago, Amotekun, meaning “leopard” in the Yoruba language. Amotekun guards aren’t allowed to use the pistols or assault rifles carried by police, but they defend themselves with locally made hunting rifles known as Dane guns.

Since Nigerian police often have difficulty coping with the high rate of crime and terrorism taking place in Nigeria’s 36 states, crime victims call upon neighborhood watchmen or, in the case of the six southwestern states where Yoruba is spoken, state-paid Amotekun guards, who travel into the forest along with police and the military.

After a failed rescue mission by a team of police, military, and Amotekun guards, the abductors called Shittu, hurling curses on her for sending the security team to bust their hideout. They also threatened to kill her husband if she tried it a second time.

“My husband was angry that I involved the police and other security personnel,” Shittu told The Epoch Times. “He stressed on [the] phone that his abductors were professional Boko Haram and that they had guns, cameras, and even anti-tracking detectors for any money collected.”

Her husband advised her to “sell the house, sell the generator—just get the money.” Then he began to roll out the names of his friends who could assist financially. As of then, Shittu said she had gathered a little above 2 million naira ($4,800), but the kidnappers insisted on “more, which they never put a figure to.”

Adegoroye and his co-abductees were later freed after paying a ransom of 3 million naira (more than $7,000) after a few days of tense negotiations, with no role played by the Amotekun nor the police.

They were lucky. Nigerian media outlets are swimming with reports of kidnapping efforts that have resulted in the murder of their victims. Even traditional leaders, considered Nigerian royalty, have been murdered or kidnapped for ransom. The military hasn’t been spared either: In August 2021, some bandits whisked away a military officer for 24 days after killing two others during an invasion of the country’s foremost military institution, the Nigerian Defense Academy in Kaduna.

On average, 13 people were abducted daily in Nigeria in the first half of 2021, according to a report by SBM Intelligence, a geopolitical research firm. The number of people kidnapped in the country within the first six months of 2021 was 2,371.

Of concern to security experts is that the violence linked to swarms of terrorist gangs that started in the northwestern state of Zamfara 11 years ago is spreading into the forested states of the Nigerian south. Ekiti state is a 5 1/2 hour drive from Lagos, but far from the Middle Belt, where violent takeovers of villages and mass killings are routinely reported.

Operation Amotekun, numbering about 2,000 personnel, was created by six southwest state governors and launched in January 2020 to support police in fighting terrorism and banditry within the six states.

“Amotekun guards are familiar with that forest, but the problem is people do not report the cases to us on time, making it difficult to catch up with the abductors,” Toyin Omoniyi, a member of Amotekun, told The Epoch Times.

“It’s possible they are professional kidnappers operating within the environs of Ekiti, especially given the fact that the state shares boundaries with the north, where Fulani migrate from in search of pasture for their cattle,” Ashiru said.

The Fulani are a large semi-nomadic tribe, with some members who are linked to banditry.

Ashiru said it was concerning that the kidnappers had a police informant.

“It shows they have insiders somewhere,” she told The Epoch Times.

Kidnapping gangs often get tipped off by informants when the police are preparing to move in on their locations, according to Rotimi Iworoko, commander of a vigilante group in one of Ekiti’s local government areas. Iworoko recalled an incident during a raid into the forest in late January.

“The vigilantes were already in the bush when their team leader received a call in the middle of the operation,” Iworoko said. “It was one of the bandits that called to warn him to order his men out of the forest—otherwise they will return to the village to kidnap the people they recently released. Now, the question [is] how did they know the guards were on that operation? Their informant can even be one of the guards on that operation.”

Apart from being paid a meager 20,000 naira ($48) per month, the shotgun-toting vigilante teams are no match for bandits holding late-model AK 47 assault rifles and sometimes rocket-propelled grenade launchers.

Nigerian lawmakers approach the violence issue in a similar manner as Democratic lawmakers in the United States, insisting that the guns themselves are the threat. Nigeria’s House of Representatives is working to amend the Firearm Act, compelling stricter penalties for illegal possession of firearms.

The proposed amendment may further cripple the operations of Amotekun in combating the spies-aided terrorists who have unhindered access to illegal arms.

Omoniyi expressed hope in talks with the government to train some of the guards in the use of arms.

Sunday Abutu, a spokesman for the Ekiti state police, didn’t respond to The Epoch Times’ request for comment about the spate of abductions.

In April 2021, Nigerian President Muhammadu Buhari sought the help of the United States to halt terrorism, saying that insecurity in Nigeria has largely been worsened by “complex negative pressures in the Sahel, Central, and West Africa, as well as the Lake Chad region.”

The government also officially declared the bandits to be terrorists in January. In the president’s New Year speech, Buhari promised that the country would be working with international partners and neighboring countries to address human security at the grassroots level.

His recent approach to law enforcement has energized the employees of Amotekun who hope to see more guardsmen recruited and better training for all who risk their lives on crime-stopping missions into the forest.