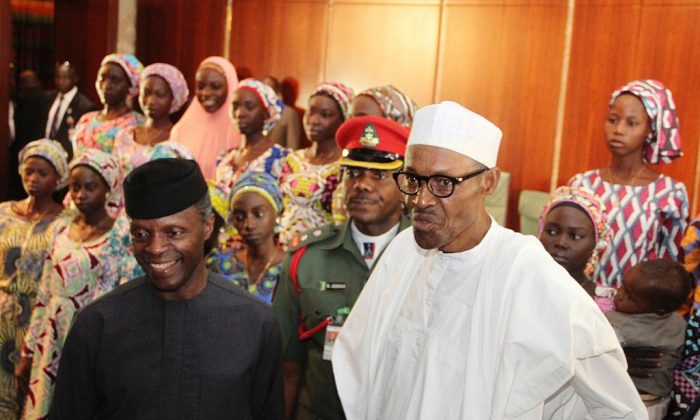 Nigerian President Muhammadu Buhari (R) meets with the 21 Chibok girls who were released by Boko Haram at the State House in Abuja, Nigeria on October 19, 2016. (PHILIP OJISUA/AFP/Getty Images)
International

LAGOS, Nigeria—Families and a lawyer say Nigerian officials prevented kidnapped Chibok girls freed from more than two years of captivity by Boko Haram Islamic extremists from spending Christmas at home with their families.

The news raises questions about Nigeria’s handling of the 21 girls freed in October by negotiation with Boko Haram. Nearly 300 were kidnapped from school in northeastern Chibok town in April 2014. Dozens escaped within hours; 219 remain captive.

Those freed have been held for trauma counseling in Abuja, the capital.

They demanded to spend Christmas at home. Human rights lawyer Emmanuel Ogebe says they reached Chibok on Christmas Eve but were held at a legislator’s house.

Parents say they were taken to see their daughters, who were not allowed to go home or to a church service.