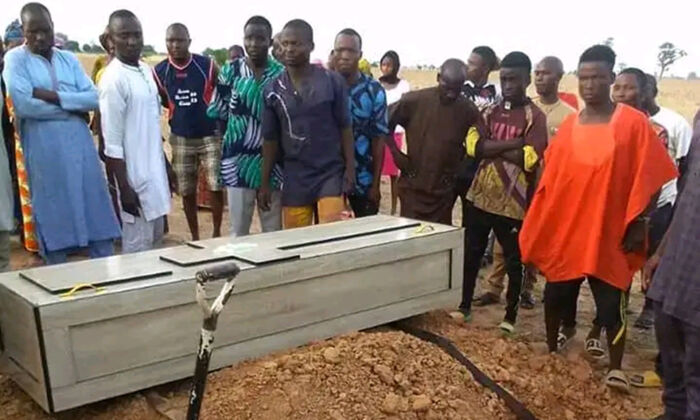 A solemn ceremony for blasphemy lynching victim Deborah Emmanuel near her family home in northeast Niger state on May 14, 2022. (Courtesy of the Emmanuel family)
Africa

A growing wave of blasphemy attacks by Islamic extremists in Nigeria has stirred anger and threatened to divide Africa’s most populous nation.

Two gruesome mob lynchings over alleged blasphemy on May 12 and June 4 have roiled the country and stirred calls for global action.

Close to one dozen people have been killed for alleged blasphemy in Nigeria in recent years according to media reports. None of the perpetrators has been brought to justice.

Analysts speaking to The Epoch Times fear the practice of prescribing death sentences for alleged blasphemy by Islamic extremists could worsen a wave of lawlessness already spreading throughout the country.

On June 5, at least 40 Christians were killed and 87 injured in a massacre in the southwestern state of Ondo, VOA News reported.

Nigeria’s Inspector General of Police, Usman Alkali, said in a statement that gunmen using AK-47 rifles and explosive devices trapped worshippers at the St. Francis Xavier Catholic Church in the town of Owo during a morning mass.

The attack, described as “heinous” by the United Nations Secretary-General Antonio Guterres, came hours after a Muslim mob lynched a member of a local civilian watch group—Ahmad Usman in the capital city of Abuja.

Usman, a Muslim, was beaten and stoned to death and his body incinerated by a mob in the Lugbe suburb on June 4 according to local media.

As of June 6, the police have arrested 15 suspects connected to the crime.

But a similar lynching of a Christian college student—Deborah Emmanuel in the northwestern state of Sokoto on May 12—did not receive as much police attention.

Emmanuel—a second-year student of Shehu Shagari College of Education in Sokoto was beaten and stoned to death by her Muslim classmates for allegedly blaspheming against the Prophet Mohammed.

Multiple witnesses confirmed that police in Sokoto stood down during the four-hour attack within the college premises. Witnesses include a fellow classmate, interviewed by The Epoch Times, who was tortured with Emmanuel for hours but survived the ordeal.

A member of the Nigerian House of Reps, Simon Mwadkwon, has accused the police of complicity.

“Their duty is to protect the lives of all citizens, but right before them somebody was being was lynched and set ablaze but they did nothing,” said Mwadkwon to The Epoch Times in a phone call.

A former Nigerian minister and human rights attorney Femi Fani-Kayode has also described the action of the police as unacceptable.

“It raises some very serious concerns which need to be looked into and questions will have to be answered,” Fani-Kayode told The Epoch Times in a phone call.

So far, the police have only arrested two out of dozens that took part in the stoning. The suspects were charged with “criminal conspiracy and inciting of public disturbance.”

Several similar attacks followed the weak handling of the Sokoto case by the Nigerian authorities.

Between May 20 and May 27, one person was reportedly killed and at least 30 others injured by Muslim mobs in the northeastern state of Bauchi after a Christian resident was accused of blasphemy.

A reporter in Bauchi, Bulus Wachakshi, told The Epoch Times the attacks occurred in Katanga in the Warji county of the state on May 20 and in Yelwa in Bauchi county on May 26 and May 27.

The violence represents “a disturbing manifestation of street persecution [by mobs] in addition to sect persecution [by terror groups] and state persecution [by Government]” in the country, according to a letter by Nigerian lawyers in America addressed to the U.S. Secretary of State Anthony Blinken.

The letter, which was signed by Emmanuel Ogebe and 16 others and shared with The Epoch Times, specifically called on the U.S. government to intervene to serve justice over the murder of Emmanuel.

The Nigerian Bar Association had announced the cancellation of its annual conference scheduled to be held in Sokoto on May 30 following the murder. This was in addition to a nationwide march held by the Christian Association of Nigeria on May 22.

The lynching has recalled similar murders in the country that have gone unpunished. Local media have reported close to a dozen such cases in recent years.

In 1995, a group of Muslims reportedly broke into a police station and dragged a Christian resident—Gideon Akaluka out of his cell and beheaded him for blasphemy. The police had held Akaluka after his wife allegedly used pages of the Quran to wipe her baby.

On July 14, 1999, in a village called Randali in Kebbi state, a Muslim mob beheaded a local resident—Abdullahi Umaru on allegations of blasphemy.

In 2006, a class teacher named Florence Chuckwu was killed alongside another 20 Christians in Bauchi after she told a student to stop reading the Quran in class while she was teaching the English language.

On March 21, 2007, a gang of Muslim youths mobbed a Christian mother of two—Christianah Oluwatoyin Oluwasesin in Gombe state for allegedly touching and defiling the Quran.

In Sept. 2007, a Muslim mob in the city of Kano killed nine Christians, burned several churches, and destroyed the homes of several others after some Christian students allegedly drew a picture of Mohammed.

On Feb. 4, 2008, another Muslim mob razed a police station in Bauchi for allegedly shielding a Christian woman whom the mob accused of desecrating the Quran.

On August 9, 2008, a Muslim mob in Kano beat to death a 50-year-old Muslim man who allegedly blasphemed against Mohammed.

In June 2016, a female Christian trader Bridget Agbahime was beheaded by a Muslim mob in Kano after she pleaded with a man attempting to pray in front of her shop to move.

Less than a month later, a female Christian evangelist—Eunice Olawale was killed by a Muslim mob for preaching about Jesus in the streets of Kaduna.

In March 2021, a water vendor popularly known as Talle Mai Ruwa was dragged from a police station in Sade, Bauchi, where he was being held and beaten to death by a mob for allegedly insulting Mohammed.

None of these murders have been followed up with successful prosecutions, according to international human rights activist Dimeji Thompson, who has been involved in prosecuting blasphemy cases in Nigeria.

“There is something in the system that is complicit,” said Thompson to The Epoch Times in a phone call.

Unless the Nigerian authorities act to prevent the “increasing” violence against their own citizens, British religious rights activist Andrew Boyd fears a spread of lawlessness that could lead to civil disorder in the country.

“International governments must unfold their arms and engage; they must take urgent steps to persuade Nigeria to act decisively to prevent the spread of such violence, whether perpetrated in the name of Islamist intolerance, or utter lawlessness,” wrote Boyd to The Epoch Times by email.

On May 18, UK government spokesperson Lord Ahmad of Wimbledon acknowledged the potential of attacks on religious minorities to rip apart one of Africa’s oldest democracies.

Ahmad was responding to a presentation by Member of Parliament Baroness Caroline Cox who lamented more than 4,400 Christians were killed in Nigeria within a nine-month period in 2021.

Cox said the UK government response has been “very inadequate.”

The crimes threaten to spread to the West if nothing was done to stop them, wrote American rights activist Judd Saul.

“The West needs to care about the plight of Christians in Africa because they are the only thing standing in the way of an African Muslim caliphate,” wrote Saul in a text message to The Epoch Times.

“When Africa falls into the hands of terrorists, imagine the amount of resources that would be available to the enemies of the West,” added Saul.

Casualty numbers for this article have been updated.