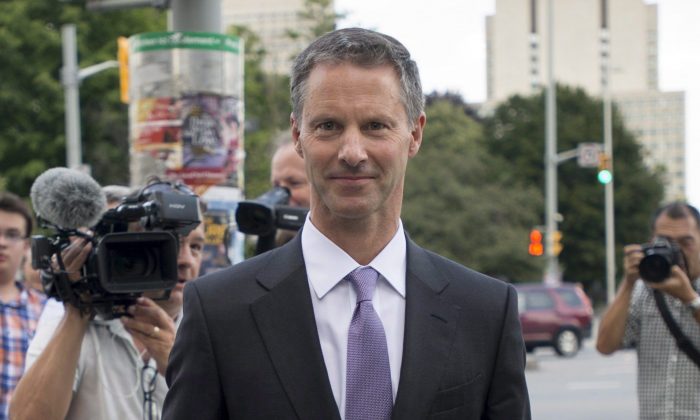 Nigel Wright, former Chief of Staff to Prime Minister Stephen Harper, leaves the courthouse on Aug. 19, 2015, following his last day of testimony at the trial of former Conservative Senator Mike Duffy. The politically incendiary information that emerged during Wright’s six days on the stand raises a new set of questions for Harper. (The Canadian Press/Justin Tang)
Canada

OTTAWA—Nigel Wright heads back to his executive life in London after a six-day stint in the witness box at the Mike Duffy trial, leaving in his wake a new set of political questions for his former boss.

And as Stephen Harper’s former chief of staff exits the stage, the prime minister’s former lawyer Benjamin Perrin is set to enter.

Wright’s testimony at suspended Senator Duffy’s fraud, breach of trust, and bribery trial served to flesh out the story around his secret repayment of Duffy’s $90,000 in contested Senate expenses.

While the RCMP had already established the broad strokes, Wright and the hundreds of emails that were filed as evidence drew a more complete picture of the elaborate, backroom machinations involving Duffy and several figures in the PMO in 2013.

Where the scandal was at first about Wright’s secret repayment, it has now morphed into an issue of honesty and transparency as contradictions pile up.

Those include trying to extract information about a confidential outside audit and pressuring senators to soften a parliamentary report on Duffy.

“These were highly exceptional circumstances. Is that fair to say …?” defence lawyer Donald Bayne said in one of his last questions on Wednesday, Aug. 19.

The following items are among the most politically incendiary information that emerged in the testimony:

The Conservative campaign has been knocked off its main electoral message for the entirety of Wright’s time in the courtroom. Harper has carefully evaded specific questions about the actions of his staff, placing the blame exclusively at the feet of Wright and Duffy.

But if Harper is breathing a sigh of relief that Wright is finished testifying, the trial will hear from more potentially problematic witnesses—including Perrin and possibly Chris Woodcock, Harper’s former head of issues management.

Where the scandal was at first about Wright’s secret repayment, it has now morphed into an issue of honesty and transparency as contradictions pile up.

The central questions that face the Conservatives include:

Separate, but not unrelated to the political implications, are the arguments at play in Duffy’s criminal trial.

Wright was used by the Crown and by Bayne to advance their competing theories about the bribery charge that Duffy faces in relation to the $90,000 cheque.

The Crown has tried to emphasize that Duffy was setting conditions and pressing the prime minister’s office to repay his expenses, in exchange for him making a political headache go away.

At the time, from December to May 2013, the fact Duffy had been claiming living expenses for the home he had long occupied in Ottawa had become an issue for a government committed to propriety.

But Bayne has tried to use Wright’s testimony and PMO emails to paint the opposite picture—that a conspiratorial group of persuasive operators within the PMO and Senate pushed Duffy to admit a mistake where he felt there was none.

Much of Bayne’s cross-examination was also focused at tearing down Wright’s credibility and his position that secretly repaying Duffy’s expenses was based on moral conviction.

A potential plus for Duffy is that Wright testified throughout that he felt Duffy had a valid argument that his expense claims were technically legal, and that the repayment scheme was not unlawful.