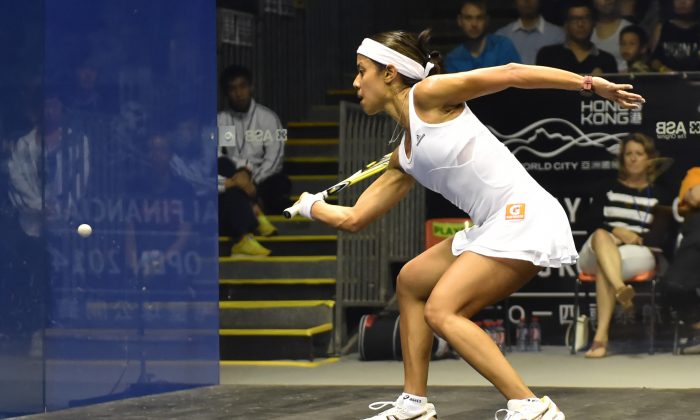 David had another hard 5-game match in the Semi-finals against Egyptian, Omneya Abdel Kawy. After David had won the first game 11-9, Kawy hit back taking two consecutive games 11-9, 11-8 before David took control winning the next two games 11-5, 11-5 to move into the Final.

David picked up her first World Open Championship title in 2005 and has been in the driving seat virtually ever since.

But is time gradually catching up with the Champion? She was surprisingly beaten in the Semi-final of the World Open in 2013 by Egyptian Nour El Sherbini. Certainly the Semi-final and Final in this tournament were tough 60+ minute matches for her, both against Egyptian girls.

Egyptian squash is certainly on the rise with good young players coming through challenging at the top level and likely to take over more top positions soon. But this tournament was in front of Egyptian local supporters and after 3 and 4-tough games in her Semi-final and Final matches respectively, David still had the fitness, skill and mental determination to take the last game(s) 11-5. David is still top of the world and is likely to stay there for a while longer.