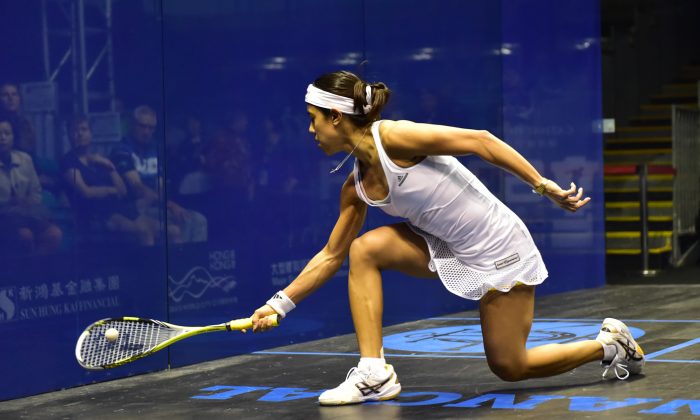 Nicol David of Malaysia on her way to her 10th Hong Kong Squash Open title, plays a forehand during the 2015 women’s final against Laura Massaro of England at the Hong Kong Park Sports Centre on Sunday Dec 6, 2015. David won the match 15-13, 11-5, 11-3. (Bill Cox/Epoch Times)
HK Sports

David looked mostly untroubled and unbeatable for the entire tournament, proving she’s still queen of the Hong Kong Open. The Malaysian former world number one raised her game in her favourite event as she cut Massaro down to size in the women’s final to win for an unprecedented 10th straight year.

David, lost her number world one spot after 109 months at the summit to Raneem El Welily of Egypt in September, proved she’s still very much a major force with this straight game victory over Massaro, the world number two.

Massaro started nervously, stroke against to go 2-0 down and another stroke against to go 4-2 down, before settling to draw level at 6-6. They were matching punch for punch to 9-9, before Massaro had a first game points at 10-9, 11-10 and 12-11. A few more lets and VDO reviews saw the match turn in the favour of Nicol for her first game ball at 13-12, but Laura again drew level 13-13. David edged ahead again 14-13 and with her second game point accidently caught Massaro on the lip with her back swing and a let was called. David then served to take the game 15-13.

The first game proved crucial, as Massaro had a strong start but missed three game points before losing after deuce, she seemed to lose her momentum. After going up 4-3 in the second, following some light interference, she was never able to come back from 5-4 and 10-5 down, losing the second game 11-5. David pounced on every loose shot with either a deft front court drop, boast or deep drill.

It got even worse for Massaro, as David’s tight boasts gave her a 5-0 lead in the third game, before taking a 10-3 lead and closed out the match on her first championship point, 11-3. After her 15-13, 11-5, 11-3 victory, the champion could not help but cry in front of the crowd in her favourite tournament that she has been dominating since 2005, when she won the World Open.

“I did cry before when I won a tournament but the victory here is so special to me,” said 32-year-old David, who’s world ranking has dropped to third.

“It has been a very long season and all the hard work paid off. I just really wanted this title to finish off the year.

“I enjoyed every moment out there on court, I gave all I got, enjoyed the crowds and I was able to play my game. The feeling is good that I still can’t believe I have won my 10th title here. It’s an amazing feeling.”

The home favourite said she would definitely come back next year to defend her title. “I will come back as long as I can,” said David.

“If I can have another four years, I will come back four times.”

Having yet to win a world series this year as her last major title was the 2014 World Open, David was under pressure against the in-form Massaro, who had a 14 match unbeaten record with two world-series wins under her belt before coming to Hong Kong.

Up until the men’s final, Pilley had been living a fairy tale, having sent home Simon Rosner (seeded 5), Gregory Gaultier (3) and Nick Matthew (2), before reaching his first ever world series final.

Elshorbagy took the initiative early on leading 5-1, before Pilley clawed his way into the contest at 5-4. Another burst of accurate shots put Elshorbagy into a 7-4 lead. A couple of let calls later it was 10-7, with Elshorbagy taking it 11-8 on his second game ball, with a no let call given against his taller plucky opponent.

Pilley tried to break Elshorbagy’s momentum and in so doing got to 4-2 up early in the second set. However, his opponent always seemed to be in the right place at the right time, anticipating Pilley’s every move, to go up 8-4 when the ball was called out. After a couple of VDO reviews, one being a stroke to the champion, Pilley succumbed 11-6. Elshorbagy’s increasing attacking style and the fitness of the 24 year old starting to pay off.

Elshorbagy started with a couple of incredible pick-up’s in the third game, cruising to a 4-0 lead. Pilley pushed hard to get the next 2 points, before a nick swung the favour back to defending champion 5-2. Some gruelling rallies saw it to 9-5. The longest point of the match took the score to 10-6 and the first championship point. But, Pilley wasn’t done, playing his best squash of the match to save three championship points, 10-8. And on the fourth championship point, a let and a VDO appeal was not enough to save the match, 11-8.

So, Cameron Pilley’s remarkable tournament finally came to a halt after a 11-8, 11-6, 11-8 defeat by defending champion Mohamed Elshorbagy of Egypt. Elshorbagy, reclaims his world number one spot after clinching the Hong Kong Open, simply proved too strong again for everyone in the end.

Andrew Wood is a squash player and sports enthusiast living in Hong Kong.