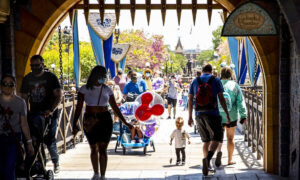 Nick Viall and His Mother Get Emotional in After the Final Rose Bachelorette Special; Nick Talks to Andi

Nick Viall and his mother were emotional in a taped portion of the After the Final Rose special that followed the Bachelorette finale.

Nick’s mother was interviewed and broke into tears, saying that it was tough to watch the show.

“I can’t even imagine what it was like for him, because it tore us apart. I want him to find love, but I’m disappointing that he has unanswered questions. He deserves to have answers. All the stuff inside that I feel that he’s just holding on, that’s just not good for anybody,” she said.

“I felt that she gave me a purpose,” Nick said.

The footage then showed Nick showing up at the After the Final Rose special, trying to get face-to-face time with Andi.

“You know she chose Josh, so what do you want?” host Chris Harrison asked him.

“Are you still in love with Andi?”

“Yeah, you don’t just stop loving someone like that just cause.”

Chris went to talk to Andi, and told him that Andi wouldn’t talk to him face-to-face, but that he could send over a letter.

The text of the letter was later revealed (see further below).

Nick appeared on the live finale to confront Andi in person. “She gave me so many reasons to be confident,” he told the host, Chris, before Andi came out. He said the hardest thing was “believing in that type of connection” and not having it work out.

When she came out, the pair had trouble looking at each other.

Nick told her that she enabled him to find a special kind of love. “You made a different choice,” he said. “But I will always be truly grateful for that.”

“You did get give that to me,” Nick noted, expressing his continued misery with what happened.

She said that Nick didn’t do anything wrong, she just loved Josh more.

“You lit me up.  You made me feel those things that people go a lifetime to find, and I feel like I made you feel the same.  I truly hoped we would have made it into the real world, where there would be no arbitrary dead-line, where those stresses that came with that environment would have melted away, where we could have had the goofy, fun, exciting relationship that I know we could have.  What we had was real to me, and it was amazing.

“I fully realize that in the end I could have been wrong about what we had.  While it’s hard to accept, I totally realize that it’s a possibility.  With that being said, when I think about the relationship that we had, very few things in my life have felt more real.

“I think about that moment when you ended things and what you said to me.  I believe you when you said something didn’t feel right with us when you woke up that morning, but I wonder if what didn’t feel right was really about us and our relationship.  I wonder if it would have been different if that night you thought about us with your heart and not with your head.  Let’s just call it what it was–our relationship was very much the road less traveled.  I totally get that all the passion, intensity, and connections that we had were accompanied by fear and sometimes discomfort. There is a reason why very few are willing to take the road less traveled. It can be scary, challenging, and risky, but if you have the courage to take it, it usually ends up being amazing.

“That is one thing that has bothered me the most–when you said you know you could have a good life with me, you just don’t think you could have a great one.  The thing is, if you were to go back and think of every moment that we spent together, the first time we met, our first date, our “wow” moment in New England, our time in France, everything about Venice, our walk in Belgium, that moment in the monastery, the first time I told you I loved you and everything about that day and night, and the adjectives to describe those moments, many words come to mind.  Words like exciting, passionate, intense, tingling, romantic, sexy, easy, and great.  You could even say scary, nerve-racking, frustrating, and challenging.  You could say all of these are words you could use to describe us, but I doubt very much you would think of those moments and the word “good” would ever come to mind.

“I am not going to say that if by some miracle you changed your mind and were willing to give us a shot that we would definitely make it.  I don’t know that.  I think that if we were willing to trust each other, be totally vulnerable with one another, and follow our hearts, we would have a great chance.  What I could promise you is that if we did make it, we would be anything but good.  It would be exciting, sometimes even hard, but definitely great.

“There is a reason why I asked you if you ever had your heart broken.  I wanted to know if you have ever “put it on the line” enough to truly have a chance at something special.  To me that is what it’s all about.  A lot of things about us scared me.  I really didn’t know if we would make it, but I was willing to put it all on the line for us because I truly believed the connection we had was incredibly unique and special.  To me, if there is no risk of being totally crushed and heartbroken then there is no way it can be great.

I realize I have to move on and I mean it when I say that if you’re truly happy with your decision and I haven’t been a thought on your mind, then I want that happiness to continue for you. If I have to move on, I will look to find amazing with someone else know that some day I will.  I just know I would much rather turn my life upside down and risk it all to have amazing with you.”