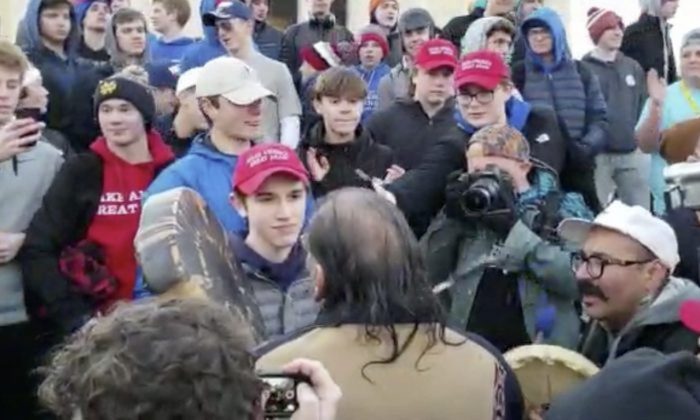 “Lin Wood and Todd McMurtry filed their first lawsuit on behalf of Nicholas Sandmann against The Washington Post,” the statement of claim announced on Feb. 19.

“The lawsuit filed is included below. The suit seeks $250 million in both compensatory and punitive damages. Lin and Todd will continue to bring wrongdoers before the court to seek damages in compensation for the harm so many have done to the Sandmann family.”

Nick Sandmann is 16 years of age, 5’9” in height and weighs 115 pounds. The school field trip to the nation’s capital was the first out-of-state trip Nick had ever taken without being with his family. He did nothing to deserve being attacked, vilified, and bullied. Nothing.

Hemmer DeFrank Wessels Defamation Attorney Lin Wood and Trial Lawyer Todd McMurtry are accusing The Post of wrongfully pursuing and bullying Sandmann because he was white, Catholic, and wearing a “MAGA” baseball cap during a trip in Washington D.C. on Jan. 18.

Wood also claimed in a Twitter post the newspaper engaged in a modern form of McCarthyism that triggered large groups of social media users to threaten and attack Sandmann.

“The Post ignored basic journalist standards because it wanted to advance its well-known and easily documented, biased agenda against President Donald J. Trump (‘the President’) by impugning individuals perceived to be supporters of the President,” the law firm said.

In this country, our society is dedicated to protecting children regardless of the color of their skin, their religious beliefs, or the caps they wear. Washington Post did not care about protecting Nick Sandmann. The Post just cared about being the first and loudest media bully.

The firm has also suggested this might be the first of many lawsuits filed against the mainstream media.

“This is only the beginning,” said the firm’s website, adding that the $250 million in damages was also the amount paid by Amazon owner Jeff Bezos when he bought the paper in 2013.

In a post to Twitter last weekend, Wood said he would start filing defamation suits against news outlets this week.

“Nick Sandmann is 16 years old has 2+ years to identify accusers [and] sue them,” he said. “No member of mainstream social media mob who attacked him should take comfort from not being sued in initial round of lawsuits, which will commence next week. Time is Nick’s friend, not his enemy.”

“At all times, Nicholas acted respectfully, responsibly, appropriately, and in a manner consistent with the values instilled upon him by his family and his religious faith,” the firm said.

A spokesperson for The Post acknowledged the claim for damages in a statement to WLWT.

“We are reviewing a copy of the lawsuit and we plan to mount a vigorous defense,” said Kristine Coratti Kelly, vice president, communications and events at The Post.

In video footage that went viral from the incident, Sandmann, wearing the red baseball cap, stands face-to-face with Native American activist Nathan Phillips, looking at him with a smile while Phillips plays his drum in Sandmann’s face.

A private investigation firm retained by Covington Diocese in Park Hills, Kentucky found no evidence the teenagers provoked a confrontation in a report released last week.

The investigation also found the students did not direct any racist or offensive comments toward Phillips, the Native American activist who waded into their group, although several performed a “tomahawk chop” to the beat of his drum.

Investigators said they found no evidence the students chanted “built that wall,” as Phillips claimed.

Several weeks ago, the teen’s lawyers sent “letters for potential lawsuits to over 50 entities ranging from Democratic politicians to celebrities to media figures.”

They include the following media companies and individuals:

Here is the complaint filed today against The Washington Post on behalf of Nick Sandmann. All members of the mainstream and social media mob of bullies who recklessly and viciously attacked Nick would be well-served to read it carefully. https://t.co/P3H4x0srlX