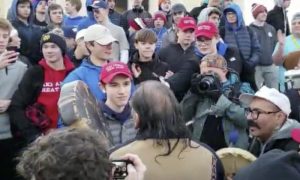 Nick Sandmann Slams People Claiming His ‘Smirk’ Was Racist and Disrespectful: ‘I See It as a Smile’

Covington Catholic High School student Nick Sandmann, who stood silent while a Native American activist drummed repeatedly within inches of his face and another activist told him to “go back to Europe,” slammed people who claimed his facial expression was racist.

A number of liberal analysts claimed that Sandmann, by standing still and smiling, was demeaning Nathan Phillips, the activist, while others noted that Phillips approached Sandmann out of the blue in Washington on Jan. 18 and invaded his personal space.

“I see it as a smile saying that this is the best you’re going to get out of me. You won’t get any further reaction of aggression, and I’m willing to stand here as long as you want to hit this drum in my face,” Sandmann told Today in his first interview following the incident.

“People have judged me based off one expression… I wasn’t smirking but people have assumed that’s what [I did], and they’ve gone from there to titling me and labeling me as a racist person, someone that’s disrespectful to adults… They’ve had to assume so many things to get there without consulting anyone that can give them the opposite story.”

“In hindsight, I wish we could’ve walked away and avoided the whole thing.”

A slew of news stories about the incident included no comment from Sandmann, nor any of his fellow Covington students, relying heavily on an edited clip of the incident and accusations by Phillips which later seemed to be discredited by video evidence. For instance, Phillips claimed the students, many of whom were wearing “Make America Great Again” hats, chanted “Build the wall,” but none of the two hours of video footage of the incident included any audio of such chants. What they were chanting, according to Sandmann, was their school spirit chant.

“Because we were being loudly attacked and taunted in public, a student in our group asked one of our teacher chaperones for permission to begin our school spirit chants to counter the hateful things that were being shouted at our group,” Sandmann wrote in a lengthy statement over the weekend. “The chants are commonly used at sporting events. They are all positive in nature and sound like what you would hear at any high school.”

“I never heard anyone say, ‘Build the wall.’ And I don’t think I’ve seen it in any videos,” Sandmann told Today.

Phillips also claimed that the students surrounded him and wouldn’t let him approach the Lincoln Memorial. However, the video shows his group deliberately approach the students despite there being ample room on each side for the group to approach the memorial; the activist pivoted in later interviews and claimed he was trying to intervene in a dispute between the students and a radical religious group who had been taunting them.

Asked what was going through his mind while Phillips drummed in his face, Sandmann replied, “I wanted the situation to die down. And I just wish he would’ve walked away.”

“Well, now I wish I would’ve walked away,” he added. “I didn’t want to be disrespectful to Mr. Phillips and walk away if he was trying to talk to me.”

In a statement released over the weekend, Sandmann said he was “startled and confused” to be singled out by Phillips.

“He locked eyes with me and approached me, coming within inches of my face. He played his drum the entire time he was in my face,” Sandmann said.

“I believed that by remaining motionless and calm, I was helping to diffuse the situation. I realized everyone had cameras and that perhaps a group of adults was trying to provoke a group of teenagers into a larger conflict. I said a silent prayer that the situation would not get out of hand,” he added.

In interviews, Phillips described feeling threatened by the large group of students, who were waiting for buses to take them back to Kentucky after attending the March for Life and sightseeing in the nation’s capital. He later slammed Sandmann for claiming to pray during the conflict.

“He stole my narrative,” Phillips told the Cincinnati Enquirer. “From the time I hit that first beat of the drum until I hit the last beat, I was in prayer. Now all of a sudden, he’s the prayer guy and the passive one.”

Sandmann responded to the Phillips’s claim that the students posed a threat: “I certainly hope they didn’t feel threatened by us. I would just say the fact remains they initiated their comments with us. I mean they provoked us into a peaceful response of school spirit.”