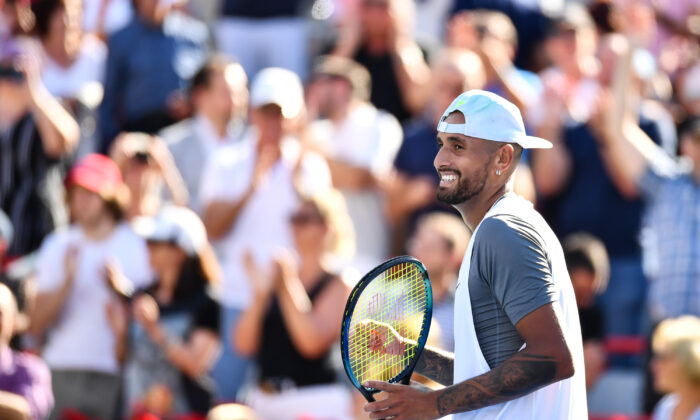 Nick Kyrgios of Australia celebrates his victory against Daniil Medveded during Day 5 of the National Bank Open at Stade IGA in Montreal on Aug. 10, 2022. (Minas Panagiotakis/Getty Images)
Tennis

Australian Nick Kyrgios stormed back from a first-set defeat to upset No. 1 seed Daniil Medvedev of Russia, winning 6–7 (2), 6–4, 6–2 on Wednesday in the Round of 32 of the National Bank Open in Montreal.

Each of the top three seeds bowed out during Wednesday’s action, with No. 2 seed Carlos Alcaraz of Spain losing to American Tommy Paul and Greek third seed Stefanos Tsitsipas dropping his late-night match to British qualifier Jack Draper.

Kyrgios has been on a roll as of late, winning 14 of his past 15 matches and claiming the title last week at the Citi Open in Washington, D.C. He improved to 3–1 against Medvedev in ATP action.

“I had a very clean objective of how I was going to play, a lot of serve-and-volley, a lot of aggressive play from the back,” Kyrgios said. “I executed better than he did, that’s all it comes down to. He won the first set and I feel like I had opportunities there as well, so hopefully I can just keep this rolling.”

“He was great. He was playing good,” Medvedev said of Kyrgios. “He beat me fairly, if we can say (it) like this.”

In the only contest of the day that did not feature at least one seeded competitor, Spaniard Pablo Carreno Busta beat Holger Rune of Denmark 6–0, 6–3.