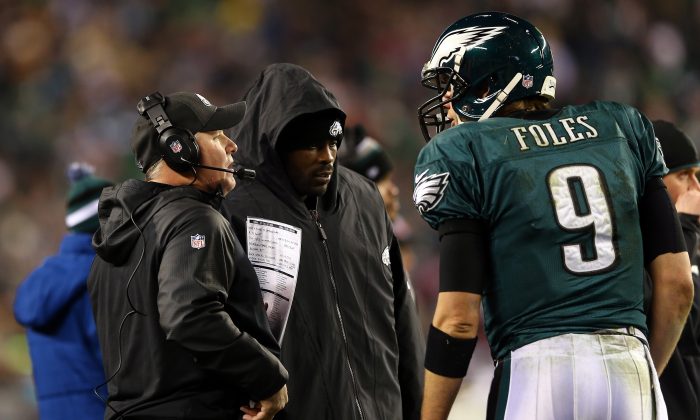 Nick Foles #9 of the Philadelphia Eagles talks with head coach Chip Kelly and teammate Michael Vick #7 on the sidelines against the New Orleans Saints during their NFC Wild Card Playoff game at Lincoln Financial Field on January 4, 2014 in Philadelphia, Pennsylvania. (Elsa/Getty Images)
NFL

Nick Foles Will Get Competition for Starting Job Next Year: Eagles Coach

Kelly, in his first press conference after the Eagles loss in the playoffs, said that “Nick is the guy” but that “there is going to be competition,” reported the Star-Ledger.

“There’s always competition,” Kelly said. “I don’t think Nick’s going to think, ‘I can go out and throw 12 interceptions in a row’ — which he’ll never do — ‘and I’m your guy.’

He added, reported ESPN: “If you also have a guy who’s not competing to be the starter — what if Nick gets hurt? All of a sudden, the other guy goes, ‘Oh, my God, I’m not ready to play because I thought Nick was going to be the guy.'”

Foles got eight wins against three losses since replacing Michael Vick midway through the season.

Vick’s contract is up, and he is expected to go elsewhere looking for a starting job.

Matt Barkley, drafted in the fourth round last year, will likely be the backup quarterback.

Foles, meanwhile, said that “Whatever they think is best for the Philadelphia Eagles, I’ll always be for that–but I’m expecting to have the ball in my hand and make plays.”

He added: “I need to get better. I don’t look at this season as, ‘Oh, I did good.’ I have to get better. We didn’t win the last game, and a lot of that goes on the quarterback.”