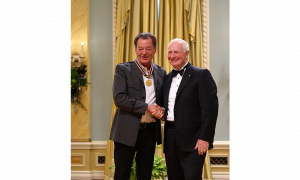 JERUSALEM—Foreign Affairs Minister Rob Nicholson is in Israel on a visit to show what he calls Canada’s “unwavering support” for the Jewish state.

Nicholson’s visit comes at a time when Israel faces increasing international criticism over its policies and the deadlock in peace talks with the Palestinians.

Last week, Israel fended off a Palestinian attempt to expel it from FIFA.

Nicholson told Netanyahu on Wednesday that “we understand that Israel’s neighbourhood is as dangerous as Canada’s is peaceful.”

Canada and Israel are close allies.

Nicholson, who took on the foreign affairs portfolio in February, is meeting with both Israeli and Palestinian officials during his three-day visit.