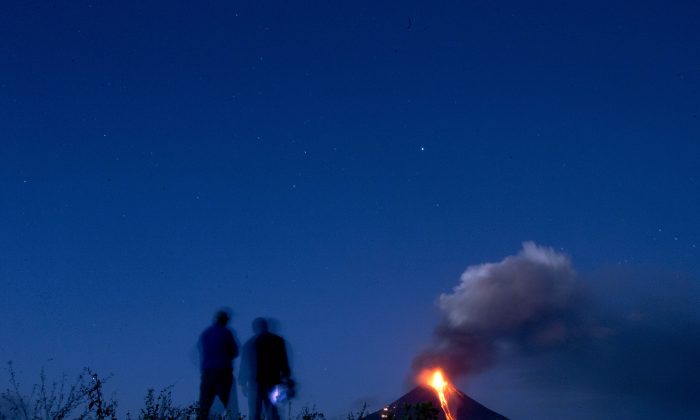 Nicaraguan Institute of Territorial Studies' employees watch from a distance the Momotombo volcano's eruption and lava flow, in the rural community of Papalonal, in Leon, Nicaragua, Wednesday, Dec, 2, 2015. Quiet for many years, the volcano emitted some glowing rock on Wednesday, after gas and ash emissions began Tuesday. In 1610, the city of Leon was destroyed during an eruption of the Momotombo and was relocated west, where it is currently located. (AP Photo/Esteban Felix)
Americas

The Momotombo volcano in Nicaragua has erupted for the first time in around 100 years, with it spouting a plume of ash about 1,000 meters high.

The 4,255-foot mountain in northwestern Nicaragua shot out some lava on Wednesday. The gas and ash emissions began on Tuesday, according to The Associated Press.

Thousands of people have asked to evacuate a four-mile area around the mountain, reported TELESur TV.

“The seismic tremor is increasing and in the volcano’s crater there are explosions every four seconds,” said Wilfried Strauch, an for the Nicaraguan Institute of Territorial Studies.

The volcano last erupted in 1905. Before that, in 1610, Momotombo erupted so fiercely it forced the city of Leon to move its location.

Local residents described the situation there. Nohelia Zamora, who lives near the volcano in the township of La Paz Centro, said that “since yesterday the volcano has been rumbling and ash and dust has been falling on us.”