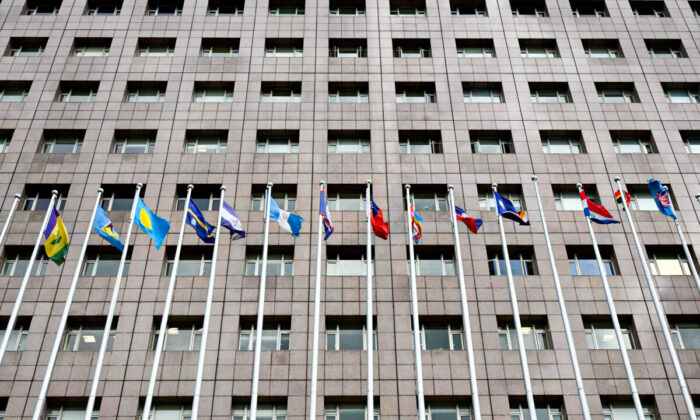 Flags fly outside the Diplomatic Quarter, a building in Taipei which houses most of nations which still retain diplomatic ties with Taiwan, on Dec. 10, 2021, after Nicaragua inked a deal switching diplomatic allegiance from Taiwan to China. (Sam Yeh/AFP via Getty Images)
Taiwan

Nicaragua Seizes Former Taiwan Embassy to Give to China

Taipei said it “strongly protested” Nicaragua’s seizure of Taiwan’s former embassy that was given to Beijing, after the Central American state severed ties with the self-governed island in favor of China.

“Regarding the Nicaraguan government’s illegal seizure of our embassy properties and unlawful transfer of them to the People’s Republic of China, it is totally unacceptable to our government and for this, we express our strong protest,” Taiwan’s Ministry of Foreign Affairs (MOFA) said on Dec. 27.

The protest followed an official statement from Daniel Ortega’s government on late Dec. 26, released by Nicaragua’s newspaper La Prensa. It said that the embassy compound and other assets belong to and will be handed over to the Chinese regime, without citing which law supports the decision.

Nicaragua had unilaterally terminated diplomatic relations with Taiwan earlier this month, declaring that it recognizes only the mainland government and Taiwan as part of the Chinese territory.

Upon the severance, Ortega’s regime asked Taiwan to recall all diplomats and staff from Nicaragua by Dec. 23. The limited timeframe pushed the democratic island to sell office premises to the Roman Catholic Archdiocese of Managua, for the symbolic amount of $1.

It did so for the purpose of “serving the public interest,” the Taiwanese ministry said. The Catholic Church promised to make good use of the assets.

Yet such an attempt was blocked by Nicaraguan authorities, with the state-controlled Attorney General’s Office calling it a “maneuver and subterfuge” to take over Beijing’s belongings, which also includes furniture and facilities stationed there, La Prensa reported.

“MOFA [Ministry of Foreign Affairs] reiterates that Taiwan has never been a part of the PRC [People’s Republic of China],” the ministry condemned the recent moves in a Dec. 27 statement, adding that the Chinese Communist Party (CCP) reserves no right to inherit its “state-owned property.”

“The Nicaraguan government is obliged to protect the premises of the Republic of China [Taiwan] Embassy, together with its property and archives,” the MOFA said, citing Article 45 of the Vienna Convention on Diplomatic Relations.

It added that the two-week withdrawal deadline is also “gravely unlawful” for violating international norms, which would normally grant countries at least a month to recall their personnel following the severance.

Taipei called on international support on Dec. 27 to call out the illegal acts and to help the Catholic diocese secure its rightful assets.

Beijing considers self-ruled Taiwan as part of China and must be brought into its fold, by force if necessary.

“The more successful Taiwan’s democracy and stronger the support for Taiwan from the international community, the larger pressure from the authoritarian rule camp comes,” Taiwan President Tsai Ing-wen said on Dec. 10, following Nicaragua’s announcement of severing ties with the island.

Taiwan has now 14 formal diplomatic allies, most of them in Latin America and the Caribbean.

Taiwan’s foreign minister later said Nicaragua’s decision to cut ties with Taiwan was part of a deliberate move by the Chinese regime targeting the island’s diplomatic allies, as Taiwan, not China, was invited to attend the U.S.-led democracy summit that was held on Dec. 9–10.

Washington criticized the Central American nation’s decision, saying it did not reflect the will of the Nicaraguan people, due to its unfree, unfair election. Ortega secured a fourth term in November’s election after jailing 40 opposition figures, including seven potential presidential candidates.

This is the second time that Nicaragua has cut ties with Taiwan under the president. Ortega first ended a 55-year recognition of Taipei in 1985 before switching back in 1990 under then-President Violeta Barrios de Chamorro.

Nicaragua has so far received two batches of China-made COVID-19 vaccines in a month, since it switched diplomatic recognition to Beijing.