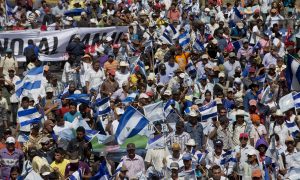 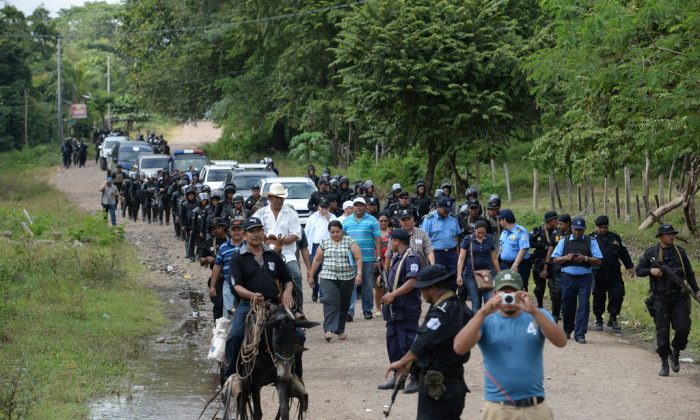 Riot police enter the town of El Tule, Nicaragua after they cleared a roadblock erected by residents, Wednesday, Dec. 24, 2014. National police special forces and soldiers fired tear gas and rubber bullets at demonstrators who had blocked the Pan American highway to protest against a proposed transoceanic canal. Thousands had maintained the roadblock since workers broke ground Monday for the $50 billion canal, which will require the expropriation of land. (AP Photo/Oscar Navarrete)
Americas

National police commissioner Aminta Granera said 30 people were arrested and 20 people were injured in the confrontation, including 15 police officers.

Granera said authorities had to use force after a week of trying to negotiate an end to the blockadeon the Pan American Highway near El Tule, about 250 miles (400 kilometers) southeast of Managua.

“The special forces called for the roads to be cleared, but they did not listen. We have acted with patience and tolerance,” she said.

Protest leader Arnulfo Sequeira said the skirmish began at dawn and confirmed there were injuries.

“This is the way the government resolves things. This is the Christmas that it gives us, sending soldiers and police to kill us, because dead is the only way they will take us from our property,” Sequeira said. Granera said there were no deaths.

Thousands had maintained the roadblock since workers broke ground Monday for the $50 billion canal, which will require the expropriation of land. President Daniel Ortega said property owners will receive a just price for their land. The Nicaraguan government has partnered with a Chinese company to build what could rival the Panama Canal.

Officials have said the 173-mile (278-kilometer) canal connecting the Caribbean Sea and Pacific Ocean will be operational by 2019.