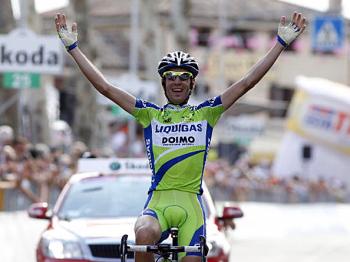 Vincenzo Nibali crosses the finish line in victory during stage 14 of the 93rd Giro of Italy. (Luk Beines/AFP/Getty Images)
News

By James Fish
Print
Liquigas rider Vincenzo Nibali flew down the dangerous descent from the peak of Monte Grappa to win Stage 14 of the 2010 Giro d’Italia.

David Aroyo of finished twelfth, but made up enough time to take the maglia rosa from Saxo Bank’s Richie Porte, who was dropped on the climb up Monte Grappa. Arroyo has a 39-second lead on the field.

Stage 14, 205 km from Ferrara to Asolso, featured a nasty 18-km climb up Monte Grappa in the final quarter of the stage. Steep and tall, Monte Grappa was the perfect place for an aggressive rider to attack, and Vincenzo Nibali on this day, was that rider.

Nibali attacked near the top of the climb, with teammate Ivan Basso, BMC’s Cadel Evans, and Androni Giocattoli‘s Michele Scarpon. Nibali made a daring and dangerous descent over wet roads, opening a 23-second gap over the other three attackers.

Team Astana’s Alexandre Vinokourov, who led the race earlier in the week, finished fifth, 1:34 back.

Starting Sunday the Giro enters the Dolomite Mountains for some of the toughest cycling on the continent. 18 percent grades, mountaintop finishes, an all-uphill time trial—the last week of the 2010 Giro will break a lot of riders.

Who will be able to recover quickest, who will balance good finishes with conserving energy, and who will eventually gain the lead?

The first two weeks were just prologue. The real 2010 Giro d’Italia starts on the road to Monte Zoncolan.