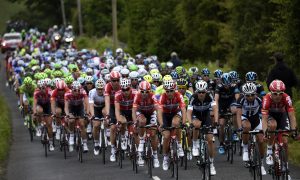 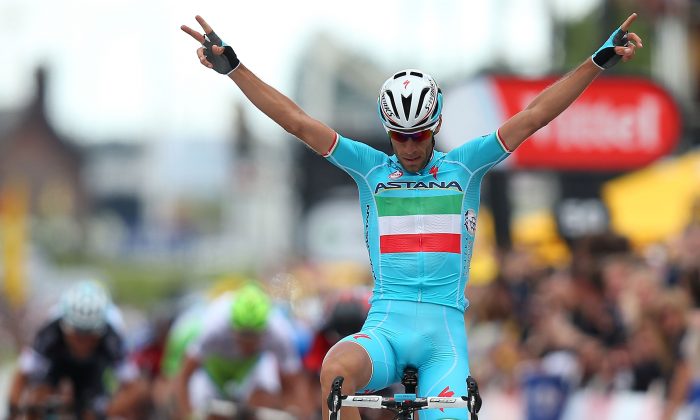 Vincenzo Nibali of Astana crosses the line to win Stage Two of the 2014 Tour de France, a 201-km stage between York and Sheffield, on July 6, 2014 in Sheffield, England. (Bryn Lennon/Getty Images)
Cycling

Newly-crowned Italian National Champion Vincenzo Nibali attacked on the descent from the last of nine climbs while his rivals wasted time watching each other, and stole the stage win and the race leader’s yellow jersey in Stage Two of the 101st Tour de France Sunday.

Nibali, leading Team Astana, is considered one of the top three contenders for an overall Tour win this year, along with Sky’s Chris Froome, and Tinkoff’s Alberto Contador, but unlike his rivals, Nibali hadn’t won a race all season until he took the national title last week.

“This is wonderful victory! It pays me off for all the sacrifices,” Niblai told letour.com. “The beginning of the season has been a difficult one for me but I’ve trained hard with my team-mates for the Tour de France and my confidence is now boosted by the two victories I just got, at the Italian championship and here today.”

In Stage Two, either inspired by winning the championship or simply strategically applying his vaunted descending skills, the Astana rider waited until the final two kilometers of the 201-km stage before turning on the afterburner and dropping the small group of General Classification contenders which were racing down from the final hill.

Nibali’s timing was perfect. None of his rivals reacted until he had a gap, and then started thinking instead of chasing.

In the group with him were Froome, Contador, and Cannondale’s Peter Sagan. No one wanted to drag Sagan to the finish because he could outsprint them all. No one wanted to give Froome or Contador a chance, because each was so strong that every second lost to either would be too hard to regain.

There was not enough road left in the race to make anything but an all-out chase, and unless all the leaders assisted, someone or some few would be overworked and then cannibalized by the others. Even though the Astana rider had only a few hundred meters advantage, he might be able to hold that gap over the remaining 1800 meters.

By the time everyone had finished calculating, Nibali was too far ahead to catch without a huge effort which might leave a chaser vulnerable, so the Italian rider was allowed to take the stage.

“It was a very nervous race with a lot of spectators. I found the right time to escape. They watched each other behind but I was scared to get caught because of the headwind,” Nibali explained.

While some riders might be satisfied with winning a stage and wearing the leader’s jersey in the world’s most prestigious cycling race, Nibali was looking long-term.

“I want to keep working with serenity. My main goal is to get a good result at the end of the Tour de France. I don’t want to lose my head. The Tour is a very hard race.

“I’m superstitious so I don’t want to say that I’ll win the overall. I’m delighted to get the yellow jersey after having won the red jersey at the Vuelta a Espana and the pink jersey at the Giro d’Italia. This is a huge satisfaction though.

“For sure the Tour de France doesn’t finish here.”