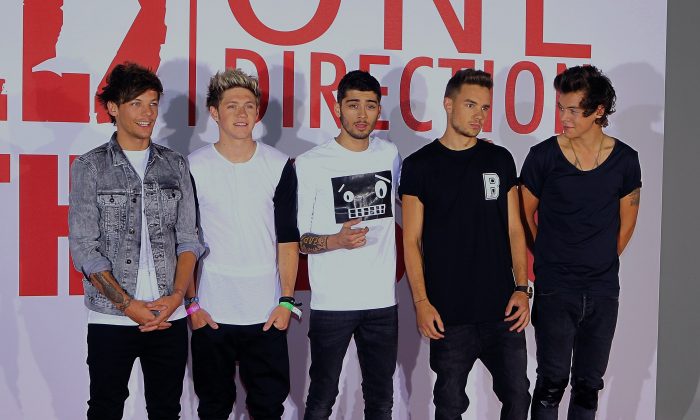 One Direction, from left to right, Louis Tomlinson, Niall Horan, Zayn Malik, Liam Payne and Harry Styles, at a photocall to promote the film, This Is Us, at the Sky Studios, London, Monday Aug. 19, 2013. The film is an intimate all-access look at life on the road for the global music phenomenon. (Photo by Jon Furniss Photography/Invision/AP)
Entertainment

Last week, there were reports saying that Horan and Payne were at odds with Harry Styles over the content of their upcoming album.

But on Twitter this weekend, Payne said that there’s no problems.

“Lots of articles saying we are clashing,” Payne wrote, adding that “no ones clashing we are just having a bit of Family time after hitting the road for 3 years (sic)”.

According to Entertainmentwise, Horan also supported Payne, retweeting the message.

The Daily Star, a U.K. newspaper, cited a source close to the pop group for its report, saying the band was having internal issues.

“[Styles] is clashing with other group members because he wants to transform their sound after the summer sell-out tour to make them ‘cooler,'” the source was quoted as saying.

“Harry loves being in the band and respects and loves his bandmates. But he’s very ambitious and thinks they should be growing up more and becoming more credible,” the source continued. “He thinks their next album is the perfect time to create a much edgier and more rock ‘n’ roll image and he’s already writing songs that he wants them to include on the record.”

According to The Metro, a source added: “Niall and Louis especially are worried about turning their backs on a pop sound and changing a winning formula.”

“The fear is that if Harry doesn’t get his way he could end up walking out and going solo,” the source added. “He doesn’t want to be five years down the line and still doing boyish pop tunes.”

In 2013, One Direction’s “Midnight Memories” was named the No. 1 selling album in the U.K.