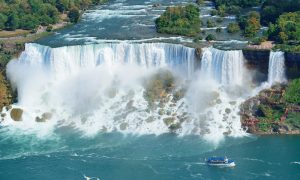 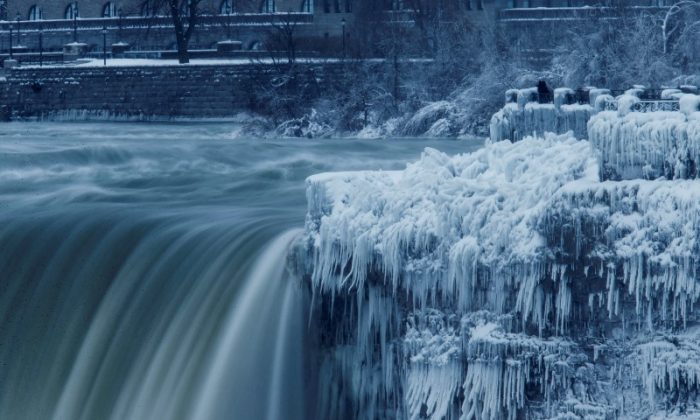 A lone visitor takes a picture near the brink of the ice covered Horseshoe Falls in Niagara Falls, Canada. (REUTERS/Aaron Lynett)
US News

Parts of Niagara Falls were frozen on Jan. 22 after a winter storm blanketed the Midwest in snow as it headed to the Northeast. The winter storm delivered frigid temperatures but also breathtaking views, enabling visitors to the waterfalls to capture beautiful photos of the partly frozen scenery.

Photos from social media showed icicles hanging like stalactites from the rocks around the falls.

Journey Behind the Falls | Photograph by Jose Marvin Ramos Evasco (@marvinevasco) . “This image was taken few minutes before sunrise at Niagara Falls, Ontario. I have been visiting this place almost every winter to capture its stunning view and icy waterfalls,” writes #YourShotPhotographer Jose Marvin Ramos Evasco. “This day was one of the worst weather conditions I have ever experienced in winter photography. A -25C temperature greeted us that morning. A very challenging experience, but in the end, I am still able to capture the beauty of this iconic waterfall.” This photo was submitted to our “For Your Shot Instagram” assignment. Go to the link in our profile to participate and for your chance to be featured on @natgeoyourshot. — “From #YourShotPhotographer Stephanie Thomson: "This is amazing Jose! It almost doesn't look real; the building looks like a miniature on some sort of set against the large waterfall and massive amounts of snow. It's an amazing perspective! Hands off to you for braving the cold. it was worth it!" — @natgeoyourshot Producer David Y. Lee

The Weather Service has issued winter storm warnings and advisories for a large swath of the eastern United States that is home to 100 million people, according to the U.S. Weather Prediction Center.

The storm system, which was moving from west to east, strengthened by cold Arctic air from Canada, hit many parts of the Midwest on Jan. 19, according to the National Weather Service.

The sun came out for only 15 minutes. Just to make this experience even more memorable I guess. I froze my butt off with -25 Celcius 🥶 #winter #waterfalls #cold #unforgettable #canada🍁 #businesstrip #bookingcom

Niagara Falls is a collective name given to three waterfalls—the Horseshoe Falls, the American Falls, and the Bridal Veil Falls—that straddle the Canadian-United States International Border between Ontario province and New York state. The falls attract an estimated 12 million tourists each year.

It is extremely hard for Niagara Falls to actually freeze such that water flow would become inhibited due to the huge volume of water in the Niagara river.

As I silently stand on the snow covered ground, I watch this natural wonder of the world and can’t help but feel blessed by the beauty, power and its presence. 💕 #niagarafalls #iceworld #waterfalls #naturalwonder #swipeleft

“Something moving as fast as the falls is extremely difficult to freeze,” Stuart M. Evans, assistant professor in the Department of Geography at the University at Buffalo, told Buffalo News.

First time I’ve gone to Niagara Falls in the winter. We got hit by a pretty gnarly storm while there, which resulted in me spending way too much money at the casino bar…. Let’s be honest though, that probably would have happened either way. 🤪🍻

Evans calls the mist near the falls “spray clouds” that persist all year round. He says that when the temperatures are sub-zero for a long time, the spray cloud is essentially freezing rain. But, he reiterates, “even if it stays cold for a very long time, the falls are going to be extremely difficult to freeze.”

According to the paper, authorities say that some 700,000 gallons of water flow over the falls every second.

The surface water mist from the falls in the air is what actually freezes in prolonged frigid conditions “but there is still plenty of water flowing,” according to website Niagara Falls USA.

Parts of the waterfall have experienced a deeper freeze in recent history. This picture from 2007 shows freezing in the top part of the falls.

But the only time recorded in history where water flow had been inhibited at Niagara Falls was in March 1848 when an ice jam caused water to completely stop flowing. While the falls still did not completely freeze over at the time either, people were able to walk out from the riverbed where an ice bridge had formed.