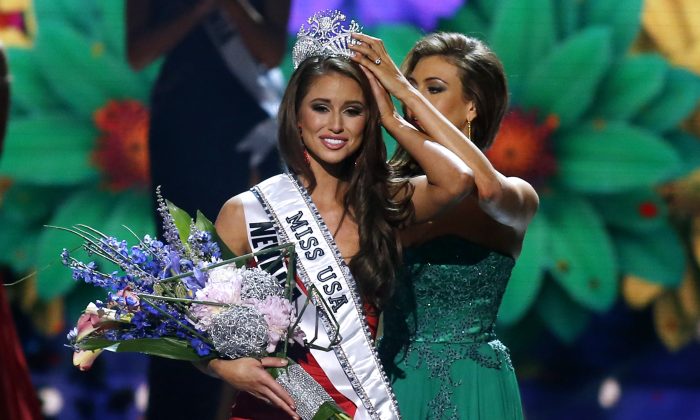 Nia Sanchez, Miss Nevada USA 2014, is the winner of this year’s beauty pageant Miss USA 2014. Sanchez is the first woman from Nevada to ever be crowned with as Miss USA and she will go on to represent USA at the Miss Universe 2014 beauty pageant.

Sanchez was born on February 16, 1990 in Henderson, Nevada, although she moved with her parents to Las Vegas at a young age. Sanchez is a reported 5’8”. Her Instagram account displays her name as “Estefania Sanchez Franco.”

The 24-year-old is dating actor Daniel Booko who congratulated Sanchez after her win, writing on his Instagram account: “In case you haven’t heard… My baby @missnvusa2014 just won #missusa2014 !!!! Ahhhhhhhh!!!! I can’t believe!! I love and am so proud of u baby!!!”

Sanchez has studied Taekwon-Do for 12 years and has a fourth-degree black belt. She believes in the power of defending oneself and said in an interview: “I learned at a young age that you need to be confident and be able to defend yourself and I think that’s something we should really implement for a lot of women,” she said in an interview with ABC.

After her parents divorced, Sanchez lived at a woman’s shelter with her mother. She became interested in pageants at age 19. According to her Facebook account, Sanchez attended the Mt. San Jacinto College (MSJC) in Riverside County, CA. She is a model with AC Talent Agency.

“Met @GiulianaRancic and @jeanniemai today! They were so nice! both were trying to figure out how to properly say Nevada. I still don’t know!” Sanchez wrote on her twitter account @Nia_Sanchez_.