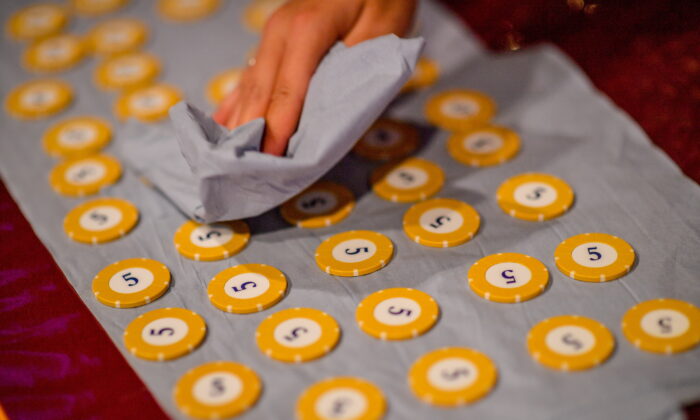 National Health Service (NHS) England is to stop taking cash from the gambling industry for the treatment of people suffering from addiction.

NHS England’s national mental health director, Claire Murdoch, has written to the grant-making charity GambleAware to say the NHS will be fully funding its own gambling services from April 1.

It comes as the NHS faces record demand for support and is launching two new gambling clinics in Southampton and Stoke-On-Trent. This will take the number of specialist clinics across England to seven.

Murdoch said the funding decision had been “heavily influenced” by patients who were uncomfortable about using services paid for by industry—a view that has been echoed by medics.

GambleAware accounts show it collected £16 million between April and December last year in voluntary donations from the gambling industry to fund a range of treatment services.

In April 2021, Murdoch told the Guardian gambling firms had profited during the pandemic but were leaving the NHS to “pick up the pieces” of addiction and should be hit with a compulsory levy to fund treatment.

In her new letter to GambleAware, she said while industry funding “has allowed us to roll out treatment services faster than would have otherwise been possible”, there is a desire to “move the funding into general NHS funding, as is standard for other similar services”.

She added: “Our decision has been heavily influenced by patients who have previously expressed concern about using services paid for directly by industry.

“Additionally, our clinicians feel there are conflicts of interest in their clinics being part-funded by resources from the gambling industry.

“The NHS cannot address the harms caused by gambling alone, nor is it the NHS’s job to tackle this on its own.

“We are therefore committed to maintaining a constructive operational relationship with GambleAware as this change is implemented and continuing to work together on developing a treatment system that is fit for purpose.”

She said the NHS would like to see the industry take “firm action” so that people do not need to seek help from the health service.

“We hope that you will continue to join us in calling for the gambling industry to be more heavily regulated and taxed to generate public funding to address gambling harms,” she added.

The two new clinics in Southampton and Stoke-On-Trent will open from May, joining those in London, Leeds, Manchester, Sunderland, and the national children and young person’s clinic in London, which is running as a pilot.

All the services are due to be evaluated later this year which is likely to lead to further clinics.

Between April and December last year, 668 people with the most severe gambling addiction issues were referred to NHS gambling clinics—up from 575 during the same period in 2020—a 16.2 percent increase, according to NHS England.

The north of England has the highest proportion of at-risk gamblers, with 4.4 percent of adults in the North West and 4.9 percent in the North East being at the most risk of addiction.

Overall, it is estimated that around 0.5 percent of the UK adult population, around 246,000 people, are likely to have some form of gambling addiction and 2.2 million are at risk.

“The opening of two new gambling clinics in May, as a part of our £2.3 billion investment into mental health services, will mean we can help even more people with the most serious gambling problems.

“It is also absolutely right that the NHS now funds these clinics independently, recognising the harmful effects this addiction can have on the nation’s mental health, and that predatory tactics from gambling companies are part of the problem, not the solution.”

Industry makes profits of over £14 billion a year from gambling in the UK.

“I am committed to protecting people harmed by gambling, including through supporting treatment and recovery at the specialist NHS gambling addiction clinics as part of the NHS Long-term Plan investment of £15 million to expand these specialist services.”

A spokesperson for the Betting and Gaming Council said its largest members pledged an additional £100 million of funding between 2019 and 2023 for research, education, and treatment services to be administered by GambleAware, but had no say how the money was spent.

“Unlike the alcohol industry, which hands the NHS the bill for problems associated with alcohol, for over 20 years the betting industry has been the majority funder of research, education, and treatment for gambling harm and will continue to do so,” the spokesperson said.

“According to the Gambling Commission, the rate of problem gambling fell from 0.6 percent to 0.3 percent in the 12 months to September last year. However, we strongly support the Gambling Review as a further opportunity to raise standards and promote safer gambling.”