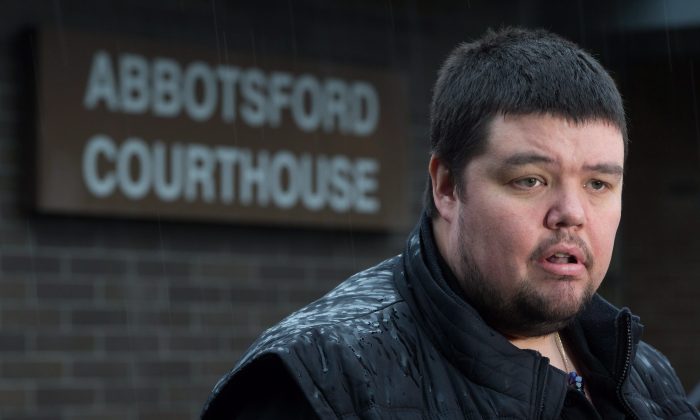 William Housty of the Heiltsuk First Nation speaks to reporters outside provincial court in Abbotsford, B.C., on Jan. 27, 2016. Anaheim Ducks' defenceman Clayton Stoner, who didn't appear in court, has pleaded guilty to hunting without a licence and was fined $10,000 after being charged under the Wildlife Act after a grizzly bear was killed on the central coast in 2013. (The Canadian Press/Darryl Dyck)
Canada

Stoner, 30, who plays for the Anaheim Ducks, faced one charge under the provincial Wildlife Act involving the hunt in B.C.’s Great Bear Rainforest in May 2013. He was fined $10,000 in an Abbotsford, B.C., court on Jan. 27. His lawyer entered the plea on his behalf.

The Crown dropped four other charges against him, including knowingly making a false statement to obtain a hunting licence, hunting out of season, and unlawfully possessing dead wildlife.

Stoner initially defended his hunting trip with his father, an uncle and a friend, but a case was mounted against him after an investigation by B.C.’s Conservation Officer Service.

Stoner’s kill sparked angry debate in September 2013 when photos were published in a Vancouver newspaper showing him holding up the grizzly’s severed head.

A First Nations group also screened a documentary in Vancouver featuring the pictures, which were taken by a Heiltsuk Nation field technician who confronted Stoner after the kill.

Jess Housty, a tribal councillor with the First Nation based in Bella Bella, has said Stoner boasted about the animal he had shot and showed off the paws and head.

The case has drawn protesters outside the hearings since September. Protesters say Stoner is an example of why trophy hunting should be banned in B.C.