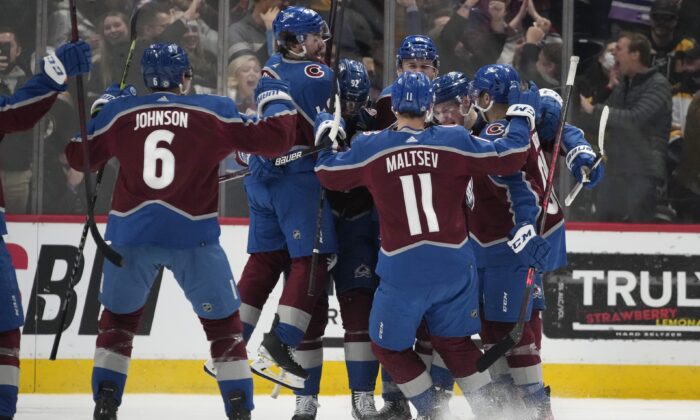 Colorado Avalanche players celebrate with defenseman Cale Makar after his power-play goal in overtime of an NHL hockey game against the Boston Bruins in Denver, on Jan. 26, 2022. (David Zalubowski/AP Photo)
International

The National Hockey League (NHL) has issued a statement condemning Moscow’s invasion of Ukraine while also announcing a complete suspension of all its business relations in Russia.

“Effective immediately, we are suspending our relationships with our business partners in Russia and we are pausing our Russian language social and digital media sites. In addition, we are discontinuing any consideration of Russia as a location for any future competitions involving the NHL,” the organization said in a press release.

The organization also raised concerns about the well-being of Russian players who currently play in the NHL on behalf of their NHL clubs. “We understand they and their families are being placed in an extremely difficult position.” The NHL urged for a quick peaceful resolution to the Russia–Ukraine conflict.

Earlier, NHL’s Hall of Fame player Dominik Hasek had called on the organization to “immediately suspend” contracts of all Russian players as every athlete not only represents himself and his club but also his country’s values and actions. Failure to do so would mean NHL has “indirect co-responsibility” toward the dead people in Ukraine, he insisted.

“I am very sorry for those Russian athletes, who condemn V. Putin and his Russian aggression in Ukraine. However, at the moment I also consider their exclusion a necessity,” Hasek said in a tweet on Feb. 26.

The NHL statement came shortly after the International Ice Hockey Federation (IIHF) announced sanctions against Belarus and Russia. IIHF has revoked Russia’s rights to host the 2023 World Junior Championship that was set to begin in December.

Both Belarus and Russia will be banned from participating in six competitions between March and September. However, IIHF did not indicate any change to the 2023 Men’s World Championship slated to kick off in Russia in May 2023.

“The IIHF is not a political entity and cannot influence the decisions being taken over the war in Ukraine,” IIHF President Luc Tardif said in the announcement.

“We nevertheless have a duty of care to all of our members and participants and must therefore do all we can to ensure that we are able to operate our events in a safe environment for all teams taking part in the IIHF World Championship program.”

In addition to IIHF and NHL, several other sports organizations have also announced actions against Russia and Belarus. The International Olympic Committee (IOC) has recommended international sports federations and sports event organizers not invite or allow the participation of athletes from Belarus and Russia in international competitions.

FIFA has suspended Russia from taking part in international games while UEFA has prohibited Russian clubs from participating in European games.