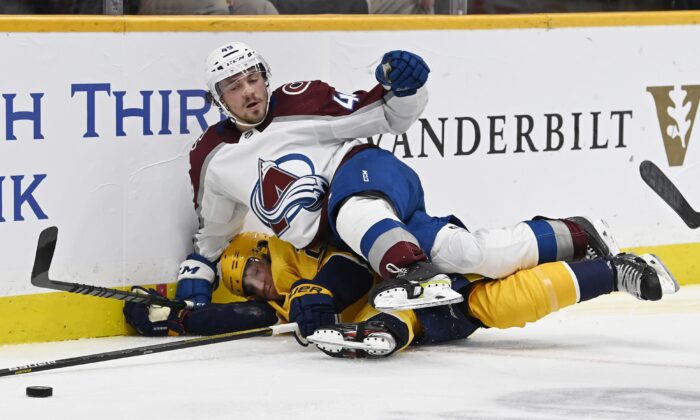 The NHL shut down two more teams through the Christmas holiday break on Friday, eager to avoid putting all 32 on pause amid worsening COVID-19 test results across the league. A total of 20 NHL games have now been postponed, the majority of which have come in recent days, and roughly 10 percent of the 700-plus players are currently in the league’s virus protocol.

While teams are reporting mostly asymptomatic or mild cases among players, the growing number of positive tests is adding to concerns that the NHL will not send its players to the Winter Olympics in China and threatening to upend a schedule for a league with seven teams in Canada that relies on cross-border travel more than any other.

“The fact that we only shut down two additional teams means we are trying to avoid a full league shutdown,” Deputy Commissioner Bill Daly told The Associated Press by email. He added that is “obviously subject to change based on circumstances.”

All games for the Colorado Avalanche and Florida Panthers have been postponed through at least next weekend, and the hard-hit Calgary Flames had their shutdown extended through the Dec. 24–26 holiday break.

“It was the only call to be made,” Flames general manager Brad Treliving said on a video call.

The training facilities for all three teams have been closed with the league citing “concern with the number of positive cases within the last two days as well concern for continued COVID spread in the coming days.”

In another blow to a league that relies heavily on ticket revenue, four of the five Canadian provinces that are home to NHL teams are or will soon limit venue capacity to 50 percent. Only Alberta, home to Edmonton and Calgary, had not announced a similar restriction and in fact was going ahead as planned with the world junior men’s hockey championship that opens Dec. 26.

More than 70 NHL players are now in protocol, including 19 on the Flames. It is a discouraging sign for the league, where all but one player on active rosters across the league, Detroit’s Tyler Bertuzzi, are considered fully vaccinated. It was unclear how many have received a vaccine booster as recommended by health officials and the league.

“So far our cases have been either asymptomatic or mildly symptomatic,” Flames Dr. Ian Auld said, adding that the team has four to six players with moderate symptoms such as chills that ended within 36–48 hours. “Overwhelmingly, we’ve seen mild disease, which is reassuring.”

The NHL postponed only five games during the first two months of the season, and one has already been rescheduled and played. As recently as last week, NHL Players’ Association executive director Don Fehr said the league has “been able to cope” with a few postponements so far.

That has changed rapidly.

In all, Calgary has had six games postponed, the Avalanche four ,and the Panthers three. The New York Islanders, Ottawa, Carolina—and now Boston and Montreal, who saw their game Saturday in Quebec called off—have all had games postponed.

Postponing this many games could threaten NHL participation in the upcoming Winter Olympics in Beijing, which begin Feb. 4. When the league and players agreed to participate, they left open the door to withdrawing if they need the two-and-a-half-week break to complete the season.

Daly said Friday there had been no decision made yet on the Olympics but noted the possibility is “becoming more and more difficult.” The league has until Jan. 10 to withdraw without financial penalty.

For now, the uncertainty will continue.

There was no word from the league on the Bruins’ game Sunday at Ottawa, which like Toronto and other cities in Ontario is capping venue capacity at 50 percent under new provincial health mandates; Manitoba, home to the Winnipeg Jets, will take a similar step Tuesday.

The Canadiens beat Philadelphia on home ice Thursday night in a mostly empty Bell Centre because of the rise of COVID-19 cases in Quebec, as required by public health officials there.

The teams that are on the ice are missing a lot of key players. The Bruins were without seven players because of COVID-19 protocol, including stars Brad Marchand and Patrice Bergeron—for Thursday night’s 3–1 loss at the New York Islanders. They played a man down with 11 forwards and six defensemen.

Florida had seven players in protocol on Thursday and Colorado had five, though the Avalanche went ahead with their game Thursday at Nashville, which also had several players and coaches unavailable for virus-related reasons.

The Toronto Maple Leafs canceled practice in Vancouver on Friday for precautionary reasons after captain John Tavares and forward Alexander Kerfoot were added to the protocol; the Canucks have five players in protocol. Hours later, British Columbia health officials said they would limit capacity at venues with more than 1,000 people to 50 percent capacity.

Later, the Maple Leafs added Wayne Simmonds and Jason Spezza to the protocol.