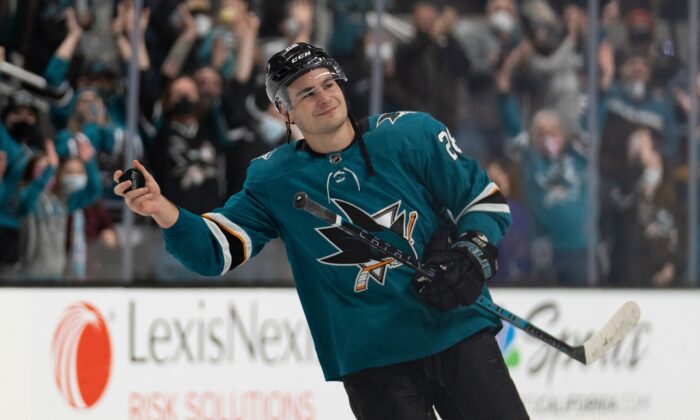 Timo Meier scored a franchise-record five goals to lead the San Jose Sharks to a 6–2 win against the visiting Los Angeles Kings on Monday afternoon.

Meier scored three goals in the first period and two more in the second to break the previous record of four goals shared by Owen Nolan, Tomas Hertl, Patrick Marleau, and Evander Kane.

Anze Kopitar and Mikey Anderson scored and Jonathan Quick made 11 saves for the Kings, who had won four in a row and six of seven.

Pavel Francouz made 25 saves in relief of Darcy Kuemper and stopped all three in the shootout and Alex Newhook also scored for the Avalanche, who have won 14 straight home games.

Dylan Larkin scored two goals, including the game-winner 2:07 into overtime, and visiting Detroit rallied from a two-goal, third-period deficit to defeat Buffalo.

Larkin netted his 18th goal of the season on a setup by Nick Leddy, as he ripping a shot past goaltender Aaron Dell’s glove. Vladislav Namestnikov had the other goal for Detroit while Alex Nedeljkovic made 26 saves as the Red Wings completed a sweep of the four-game season series.

Henri Jokiharju and Jeff Skinner scored for the Sabres, and Dell stopped 32 shots.

Joonas Donskoi netted the clincher in a shootout, as Seattle snapped a nine-game losing streak with a victory against visiting Chicago.

Vince Dunn and Ryan Donato scored in regulation and Donato also tallied in the shootout for Seattle, which had been 0-8-1 since Dec. 14. Philipp Grubauer stopped 25 shots, plus both of Chicago’s attempts in the shootout.

Dominik Kubalik had a goal and an assist and Brandon Hagel also scored for the Blackhawks, who had a season-best-tying, four-game winning streak snapped. Chicago goalie Marc-Andre Fleury made 35 saves.

Nick Schmaltz produced a goal and two assists as Coyotes earned a victory over Montreal in Glendale, Ariz., to snap a two-game losing streak.

Johan Larsson, Clayton Keller and Janis Moser each registered a goal and an assist for the Coyotes. Travis Boyd also hit the back of the net, and Karel Vejmelka turned away 24 of 26 Montreal shots.

Rem Pitlick scored in his second game for the Canadiens, and Ryan Poehling netted a marker for Montreal, which lost its sixth straight (0-4-2).

Jason Zucker scored two goals and Jake Guentzel recorded his 20th of the season as Pittsburgh produced five unanswered goals to rally from a three-goal, first-period deficit and win in Las Vegas.

Teddy Blueger and Sidney Crosby also scored goals and Kasperi Kapanen and Jeff Carter each added a pair of assists for the Penguins, who won for the 13th time in 15 games. Tristan Jarry made 23 saves for the victory.

Ivan Barbashev and Brayden Schenn produced two goals and two assists each to rally St. Louis past visiting Nashville. The Blues overcame a 2–0 first-period hole while improving 13-1-1 in their past 15 home games.

Ryan O’Reilly added a goal and two assists for the Blues. Ville Husso, making his third start in five games, recorded 32 saves to earn the win.

Ryan Johansen, Filip Forsberg, and Yakov Trenin—all just back from COVID-19 protocol—scored for the Predators, who are winless (0-2-1) in their past three games. Juuse Saros made 24 saves.

Brock Nelson opened the scoring shortly beyond the midway point of the second period for New York, which never relinquished the lead in beating Philadelphia at Elmont, N.Y.

Coach Barry Trotz returned to the Islanders’ bench after missing the previous three games over 15 days due to the death of his other and then entering COVID-19 protocol. Casey Cizikas, Anthony Beauvillier, and Matt Martin also scored for the Islanders. Cal Clutterbuck logged two assists, Nelson also had an assist, and Ilya Sorokin made 26 saves.

Travis Konecny scored his 100th career goal for the Flyers, who have lost eight straight (0-6-2)—their second skid of at least eight games this season. Martin Jones recorded 27 saves.