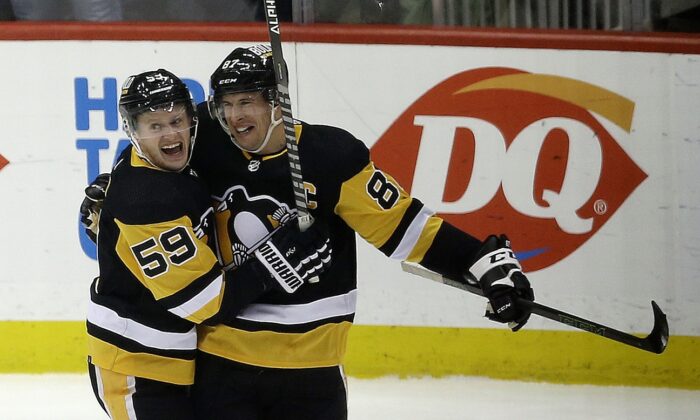 Kris Letang scored off a two-on-one 31 seconds into overtime and Sidney Crosby scored his 500th career goal as the host Pittsburgh Penguins won their fourth in a row, beating the Philadelphia Flyers 5–4 on Tuesday.

Dominik Simon, Jake Guentzel and Chad Ruhwedel also scored for the Penguins. Letang and Crosby each added an assist, and Pittsburgh goaltender Casey DeSmith made 23 saves. The Penguins rallied from a two-goal, third-period deficit by scoring twice in 18 seconds.

Alex Ovechkin reached 30 goals for the 16th season as visiting Washington defeated Nashville for its fourth straight road win. Ovechkin scored his 30th and 31st goals, passing Jaromir Jagr (15 seasons with 30 or more goals). He is second only to Mike Gartner (17) in that category.

Michael McCarron scored for the Predators, who have lost four of their past five games. Juuse Saros made 24 saves.

K’Andre Miller scored the deciding goal in the ninth round of the shootout as host New York outlasted Boston for its third straight win.

Charlie Coyle scored early in the opening period for the Bruins while Filip Chytil scored midway through the third period for New York.

Jake Oettinger made 46 saves and Jason Robertson recorded a goal and an assist for Dallas, which earned a split of a home-and-home set with Colorado.

Connor McDavid added a goal and Mike Smith made 30 saves for the Oilers, who pulled even with the Kings and the Anaheim Ducks for third place in the Pacific Division, all with 55 points. Edmonton has outscored its opponents 11–3 since Woodcroft was named the coach on Thursday after Dave Tippett was fired.

Arthur Kaliyev and Phillip Danault scored goals for the Kings, who were playing for the first time in 13 days. The Kings returned to the ice after recording a point in every game of a six-game road trip (4–0–2).

Elias Lindholm had a goal and two assists to help Calgary beat visiting Columbus for its seventh straight win.

Tyler Toffoli scored in his team debut for the Flames, who moved past the Vegas Golden Knights and into first place in the Pacific Division. Erik Gudbranson, Matthew Tkachuk, Dillon Dube and Adam Ruzicka also scored, and Dan Vladar made 18 saves.

Adam Boqvist and Zach Werenski scored and Elvis Merzlikins made 35 saves for the Blue Jackets, who had won three in a row and five of six.

Kyle Okposo, Tage Thompson and Alex Tuch scored in the first two periods and Henri Jokiharju scored the first empty-netter with 1:05 left for the Sabres, who have won two straight for just the third time since opening the season with a three-game winning streak. Goalie Dustin Tokarski made 30 saves.

Kyle Palmieri scored twice and Anders Lee collected a goal and an assist for the Islanders, who went 1–3–0 on a four-game road trip and have lost seven of 10 (3–7–0). Sorokin recorded 35 saves.

Robert Thomas had a goal and two assists and Pavel Buchnevich had three assists for the Blues, who won their second straight game. Brayden Schenn and Oskar Sundqvist also scored, and Ville Husso made 18 saves to earn the victory.

Tim Stutzle and Parker Kelly scored and Erik Brannstrom had two assists for the Senators, who lost for the third time in their past four games. Matt Murray made 27 saves before exiting the game midway through the third period after Sundqvist fell on him. Anton Forsberg took over in the Ottawa crease and stopped all four shots he faced.

Tampa Bay’s Victor Hedman scored the go-ahead goal in the third period as the Lightning scored five unanswered goals against New Jersey, beating the Devils in Newark, N.J., to win the season series.

Trailing 3–1 in the second, Tampa Bay scored twice to end the period, then added three goals in the final period to win its second straight game and improve to 11–3–1 in the past 15 matches. The Lightning got goals Tuesday from Steven Stamkos, Alex Killorn, Pat Maroon, Nikita Kucherov and Pierre-Edouard Bellemare.

New Jersey rookie Dawson Mercer recorded a tally off a Lightning own-goal and posted two assists for a career-high three points, and Yegor Sharangovich and Jack Hughes each tallied and had a helper as the Devils fell to 2–9–0 in their past 11 games.