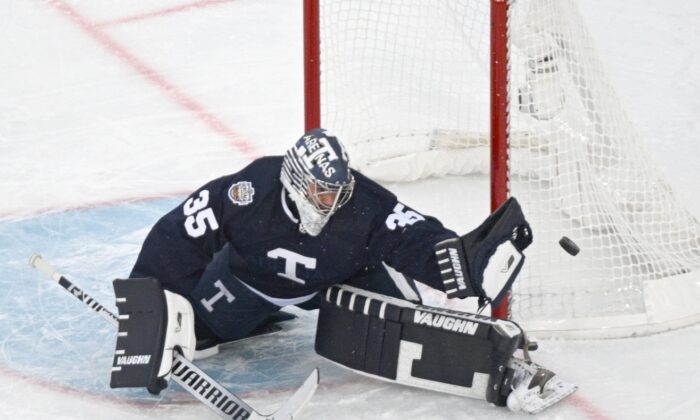 Hinostroza, who scored the go-ahead goal in the third period, also had an assist. Tage Thompson added a goal and an assist for Buffalo in the game played outdoors at the home of the Hamilton Tiger-Cats of the Canadian Football League.

Craig Anderson stopped 34 shots for the Sabres, who have won two in a row.

Ondrej Kase and Auston Matthews scored for the Maple Leafs, with Matthews netting his league-leading 45th goal. Peter Mrazek made 33 saves for Toronto, which has lost two straight.

Cole Sillinger scored his first career hat trick and Oliver Bjorkstrand had a goal and three assists to lead host Columbus to a victory over slumping Vegas.

Patrik Laine and Eric Robinson also scored goals and Max Domi and Dean Kukan each had two assists for the Blue Jackets, who won their second straight game. Elvis Merzlikins finished with 23 saves.

Jonathan Marchessault had a goal and an assist and Jack Eichel, William Carrier and Evgenii Dadonov also scored goals for Vegas, which lost its fourth straight game and its 10th time in the last 14. Logan Thompson, making his third career NHL start, stopped 32 of 37 shots, while Chandler Stephenson added a pair of assists.

Roman Josi had two goals and two assists as Nashville moved into a tie for third place with host Minnesota in the NHL’s Central Division with the win in Saint Paul, Minn.

Filip Forsberg (two goals, one assist) and Nick Cousins (one goal, two assists) had three points apiece and Philip Tomasino added a goal and an assist for Nashville, which spoiled the opener of Minnesota’s franchise-long, nine-game homestand and the jersey retirement ceremony of Mikko Koivu, the first Wild player so honored. Predators goaltender David Rittich made 26 saves.

Matt Boldy and Jordan Greenway scored for the Wild, and Kaapo Kahkonen stopped 19 of 23 shots.

Brian Boyle had a goal and an assist, and Tristan Jarry made 41 saves as Pittsburgh built a two-goal lead and held off visiting Carolina.

Danton Heinen, Sidney Crosby and Zach Aston-Reese also scored for the Penguins, who won their second straight and are 5-1-1 in their past seven.

Brett Pesce and Sebastian Aho scored for the Hurricanes, who had their four-game winning streak snapped and missed a chance to sweep the three-game season series. Carolina goaltender Antti Raanta made 18 saves.

Rem Pitlick tallied late in regulation and Cole Caufield scored at 2:10 of overtime to lift Montreal past host Philadelphia.

Caufield, who added an assist, picked up his eighth goal in the last 14 games. Nick Suzuki scored two goals, Pitlick finished with a goal and an assist, and the Canadiens snapped a two-game losing streak. Chris Wideman had two assists, while Montreal goaltender Sam Montembeault made 27 saves.

Kevin Hayes, Claude Giroux and Cam Atkinson each scored for the Flyers, who have dropped three in a row. Philadelphia goaltender Carter Hart stopped 31 shots.

Jonathan Quick made 30 saves and stopped three attempts in the five-round shootout for the Kings, who were coming off back-to-back losses to the San Jose Sharks. Rasmus Kupari also scored for Los Angeles, and Adrian Kempe and Trevor Moore scored in the shootout.

Eetu Luostarinen and Brandon Montour scored in regulation, and Spencer Knight made 35 saves for Florida, which began a seven-game road trip. Aleksander Barkov tallied in the shootout.

Victor Hedman and Ross Colton scored early in the first period, and Andrei Vasilevskiy made the goals stand up with 35 saves as Tampa Bay edged host Vancouver.

Hedman and Colton both found the net in just over the first five minutes as the teams met for the second time—the first a 4–2 Lightning home win on Jan. 13. After losing three of his last four starts, Vasilevskiy improved to 31-11-4 by allowing only J.T. Miller’s goal in the third period.

The win was the Lightning’s fourth straight. Vancouver is 1-1-1 on its second seven-game homestand and has dropped two straight contests (0-1-1). Thatcher Demko recorded 29 saves.

Pierre Luc-Dubois scored the overtime winner to lift Winnipeg over St. Louis for its third win in four games.

Vladimir Tarasenko had a goal and two assists, and Brayden Schenn had a goal and an assist for the Blues. David Perron also scored and Jordan Binnington made 33 saves.

Kyle Palmieri and Anders Lee scored in the final half-minute of the first period for host New York, which tied a season high by winning its third straight game with a victory over Anaheim.

Palmieri finished with two goals, while Zach Parise added a goal for the Islanders, who have won three straight games on three occasions this season. Goalie Ilya Sorokin made 39 saves as New York finished 4–2–0 on a six-game homestand.

Josh Manson, Isac Lundestrom and Adam Henrique scored for the Ducks, who have lost the first four games of a five-game road trip (0–3–1) and remained four points behind the Vegas Golden Knights in the race for the final wild-card spot in the Western Conference. Goalie John Gibson recorded 25 saves.

Mikko Rantanen had a goal and an assist to back Kuemper’s fourth shutout of the season and the 24th of his career. He has three shutouts in nine career games against the Flames.

Dan Vladar stopped 29 shots for Calgary, which had its two-game winning streak stopped.