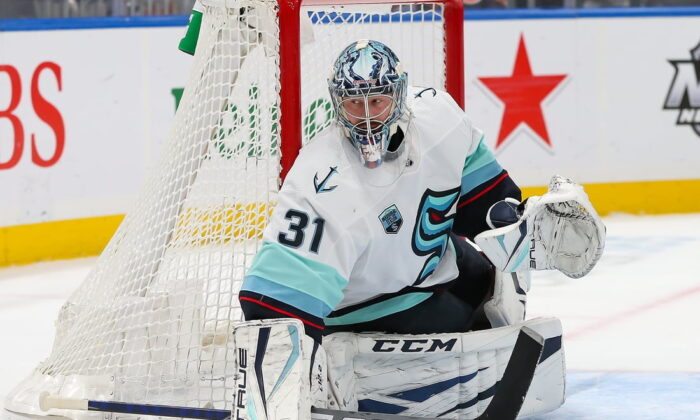 Philipp Grubauer stopped all 19 shots he faced Wednesday night in recording the first shutout for the expansion Seattle Kraken, who beat the New York Islanders 3–0 in Elmont, New York.

The shutout was the first for Grubauer since he had 18 saves in the Colorado Avalanche’s 6–0 win over the Los Angeles Kings on May 12, 2021. After the horn sounded Wednesday, teammates poured on to the ice to congratulate Grubauer, with fellow goalie Chris Driedger greeting Grubauer last and wrapping him in a hug.

Jared McCann and Vince Dunn scored early in the third period and Mason Appleton added an empty-netter with 1.5 seconds left for Seattle. The Kraken finished 2–2–0 on a four-game Eastern Conference road trip and head into the All-Star break with five wins in their past nine games (5–4–0).

Ryan Nugent-Hopkins scored a short-handed goal at 15:57 of the third period to break a tie and lead visiting Edmonton to a victory against Alex Ovechkin-less Washington.

Nugent-Hopkins’ winning goal came on a two-on-one break with Zach Hyman. After the original shot was stopped, Hyman sent the rebound across the goalmouth to Nugent-Hopkins, who tapped the puck in. Nugent-Hopkins added an empty-netter at 18:55 to clinch the victory.

Christopher Tanev registered the tiebreaking goal and recorded three assists while Blake Coleman scored twice and had an assist as Calgary won its third game in a row, beating Arizona at Glendale, Arizona.

Elias Lindholm also scored and Andrew Mangiapane recorded two assists for the Flames, who outshot the Coyotes 50–28 to enter the All-Star break winners in five of six. Tanev finished with the first four-point night of his 12-year career. Only once previously had he logged three points in a game.

Clayton Keller extended his point streak to six games with a goal and an assist and Alex Galchenyuk scored in a second consecutive contest for the Coyotes, but Arizona couldn’t build on ending its five-game skid Tuesday, when it halted Colorado’s 10-game winning streak with a 3–2 shootout victory.

Phillip Danault scored two goals to help lead Los Angeles to a road win over Detroit. The Kings won for the third time in their last four games while the Red Wings lost for the second time in three games.

The Red Wings got goals from Michael Rasmussen, Tyler Bertuzzi and Joe Veleno. Alex Nedeljkovic stopped 40 shots in the loss.

Frederick Gaudreau and Mats Zuccarello scored 2:03 apart in the second period and Kevin Fiala and Nico Sturm scored 1:24 apart in the third to support a 30-save shutout from Cam Talbot as visiting Minnesota dumped Chicago.

Gaudreau, Zuccarello and Fiala each finished with a goal and an assist to help the Wild extend their winning streak to six games. Kirill Kaprizov also scored for Minnesota, which enters the All-Star break on a 10-game point streak (9–0–1).

Chicago took its seventh loss in eight games (1–5–2). Marc-Andre Fleury made 25 saves on 30 shots before yielding to Collin Delia with 7:58 to go. Delia stopped all five shots he faced.