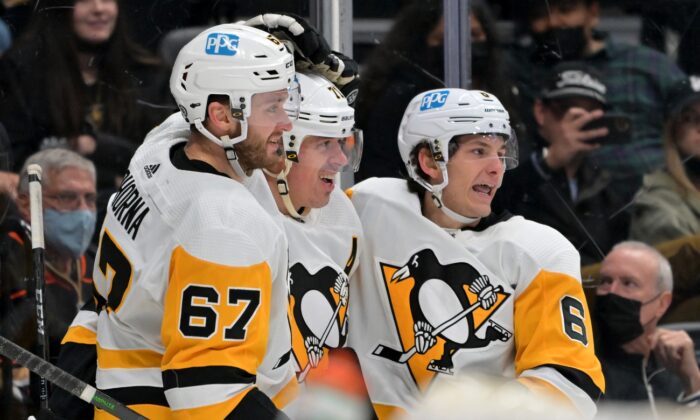 Evgeni Malkin produced two goals and an assist in his season debut and Jeff Carter added two scores as the visiting Pittsburgh Penguins earned a 4–1 victory over the Anaheim Ducks on Tuesday.

Kasperi Kapanen had two assists and Tristan Jarry made 25 saves for the Penguins, who earned the victory one game after their 10-game winning streak ended with a 3–2 road defeat to the Dallas Stars on Saturday.

Malkin, who has been out since surgery in June to repair the ACL and MCL in his right knee, found the net twice in the second period, scoring in a regular-season game for the first time since March 15 against the Boston Bruins.

Jakob Silfverberg had a goal for the Ducks to end a 30-game scoring drought. Goalie Anthony Stolarz stopped 30 shots in place of John Gibson, who is in COVID-19 protocol.

Cale Makar tallied a goal and two assists, Nicolas Aube-Kubel added a goal and an assist and Andre Burakovsky and Nathan MacKinnon also scored for the Avalanche. Nazem Kadri and Samuel Girard had two assists each and Darcy Kuemper made 27 saves for Colorado, which had its five-game winning streak snapped.

William Nylander scored in the third round of a shootout to give Toronto a victory over Vegas in Las Vegas.

Nylander, who also scored the first goal of the game, fired a forehand shot over the glove of Vegas goaltender Robin Lehner to win it. Auston Matthews and Ilya Mikheyev also scored goals for Toronto while Campbell finished with 31 saves to improve to 18-5-3 on the season. Toronto improved to 5-0-1 in its past six games.

Alex Pietrangelo, William Karlsson and Keegan Kolesar scored for Vegas, which lost for the fourth time in its last five games (0-2-2). Lehner, who stopped shootout tries by Jason Spezza and Matthews before yielding Nylander’s game-winner, finished with 15 saves.

Following a 32-game absence due to an upper-body injury, Kucherov tallied twice in the second period—his second and third goals overall and first since netting against Detroit in the season’s second game on Oct. 14. The right wing added another tally 10 minutes later and finished his three-goal night at 13:57 of the third.

Steven Stamkos notched a goal and two assists for the Lightning, who are 7-3-1 in their past 11 games and have won eight of their past nine against Buffalo.

Logan Couture scored one minute into overtime and San Jose topped visiting Detroit for its third win in a row.

Timo Meier and Jeffrey Viel scored for the Sharks, who have won three straight at home and are 7–1 in games decided beyond regulation. Brent Burns had three assists, Jonathan Dahlen added two helpers and Adin Hill made 17 saves.

Tyler Bertuzzi and Nick Leddy were the goal-scorers for the Red Wings, who dropped their third consecutive contest while slipping to 0-4-2 in their past six on the road. Filip Hronek assisted on both tallies, and Alex Nedeljkovic stopped 37 shots.

Florida, which has the best home record in the NHL, successfully defended its ice once again, using two goals and an assist from Sam Reinhart to defeat Vancouver in Sunrise, Fla.

Florida improved to 19-3-0 at home, also getting one goal each from Aaron Ekblad, Maxim Mamin and Aleksander Barkov. Ekblad, Frank Vatrano and Anton Lundell added two assists each.

Jason Dickinson and Juho Lammikko scored for the Canucks, who were playing their first game since Jan. 1 due to a pair of COVID-related postponements. Vancouver goaltender Thatcher Demko had a rough game, allowing five goals on 26 shots.

Columbus captain Boone Jenner scored his team-leading 14th goal and second in as many games. Gustav Nyquist collected a goal and an assist and Joonas Korpisalo made 16 saves for the Blue Jackets, who have lost four of their last five games.