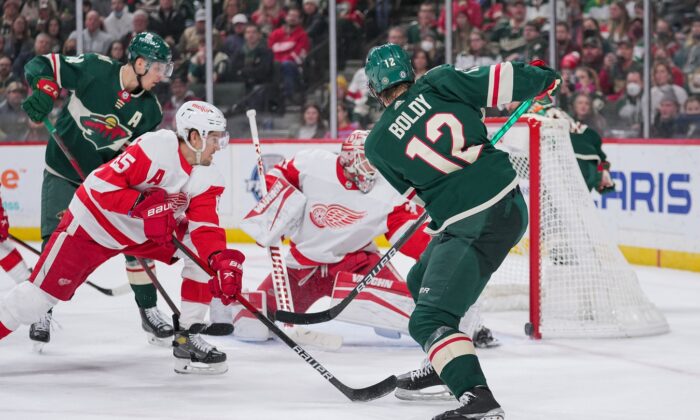 Boldy, a 20-year-old rookie who entered the night with four goals on the season, also had an assist. Kirill Kaprizov supplied two goals and an assist for Minnesota, and Joel Eriksson Ek had a goal and an assist. Ryan Hartman also scored, Mats Zuccarello notched three assists and Jared Spurgeon collected two assists.

Third-year player Gustav Lindstrom scored his first career goal for Detroit. Dylan Larkin had a goal and an assist. Lucas Raymond and Sam Gagner also scored for Detroit, and Moritz Seider and Tyler Bertuzzi each had two assists. Alex Nedeljkovic made 18 saves.

Patrick Kane had a goal and an assist, giving him 10 points over his past seven games, and Marc-Andre Fleury made 31 saves to lead Chicago to a win at Winnipeg.

With the game tied 1–1 at 9:42 of the third period, Alex DeBrincat took a loose puck at center ice and skated into the slot before wiring a wrist shot past Jets goalie Connor Hellebuyck (21 saves).

Brandon Hagel sealed Chicago’s victory with an empty-net goal in the final minute, with both Kane and Fleury recording assists. Mark Scheifele tallied the Jets’ only goal, extending his goal-scoring streak to four games.

Stuart Skinner made 20 saves for his first career shutout while leading visiting Edmonton past San Jose.

Connor McDavid, Warren Foegele and Darnell Nurse scored goals for the Oilers, who improved to 2-0-0 under new head coach Jay Woodcroft while also moving to 4-0-1 in their past five road games. Evan Bouchard added a pair of assists.

James Reimer stopped 36 of 39 shots for San Jose, which was playing its first game since Feb. 1. It was the fourth shutout at home this season for the Sharks, who are winless in their past four games (0-2-2).

Mitchell Marner had a goal and two assists, Michael Bunting contributed a goal and an assist and Toronto won at Seattle.

Alexander Kerfoot, Ondrej Kase, David Kampf and Jake Muzzin also scored for the Maple Leafs, who finished a three-game trip with one win. Auston Matthews and Timothy Liljegren each added two assists while Jack Campbell made 23 saves for the Maple Leafs.

Calle Jarnkrok had a goal and an assist for the Kraken, who lost for the fourth time in their past six games. Jared McCann also scored. Seattle goaltender Philipp Grubauer allowed three goals on 11 shots in the first period. He was replaced to start the second period by Chris Driedger, who made 11 saves.