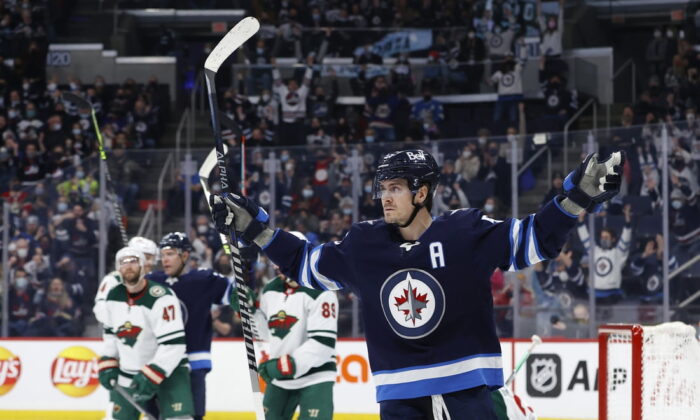 Mark Scheifele recorded his fifth career hat trick and second of the season to propel the host Winnipeg Jets to a 6–3 win against the Minnesota Wild on Wednesday.

Captain Blake Wheeler had four assists, Scheifele added one of his own and Connor Hellebuyck made 33 saves for the Jets, who improved to 3–1–1 in their past five games.

Cole Perfetti had a goal and an assist for Winnipeg, and Kyle Connor and Paul Stastny also scored.

Joel Eriksson Ek, Mats Zuccarello and Dmitry Kulikov scored for the Wild, who lost for only the second time in their past 10 games—both times to the Jets. Zuccarello also had an assist, and Kirill Kaprizov contributed two helpers.

Aaron Ekblad scored 16 seconds into overtime as Florida came from behind to win in Raleigh, North Carolina. The Panthers had tied the game on Sam Reinhart’s tally with 48.3 seconds left in regulation.

Aleksander Barkov also scored and Sergei Bobrovsky made 16 saves for the Panthers, who played in their first game since the All-Star break.

Teuvo Teravainen and Tony DeAngelo scored for the Hurricanes, and Frederik Andersen racked up 28 saves.

Darcy Kuemper made 29 saves for his second consecutive shutout as Colorado spoiled Jack Eichel’s debut with Vegas with a victory in Las Vegas.

Gabriel Landeskog and Mikko Rantanen scored third-period goals and Cale Makar had two assists for Colorado, which is 18–1–2 in its past 21 games.

Laurent Brossoit finished with 23 saves for the Golden Knights. Eichel, obtained in a Nov. 4 trade with Buffalo, was playing in a game for the first time since March 7, 2021, after undergoing neck disc replacement surgery on Nov. 12. He spent 17:32 on the ice and had one shot to go along with four penalty minutes.

Lindholm scored a goal in his sixth straight game while increasing his point streak to eight games (seven goals, six assists). Johnny Gaudreau and Matthew Tkachuk each had a goal and two assists for the Flames, Dillon Dube added a goal and an assist, and Andrew Mangiapane also scored.

Isac Lundestrom had a goal and an assist for his second straight multi-point game for the Ducks, who have lost three in a row (0–2–1). Sonny Milano also scored.