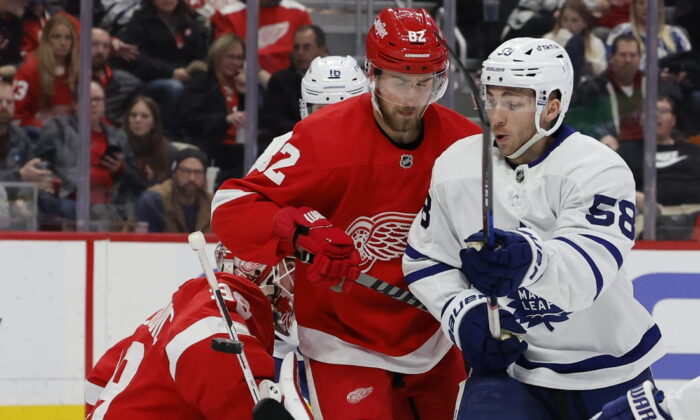 Rasmus Sandin scored the go-ahead goal, his first goal of the season. Pierre Engvall, Mitchell Marner and John Tavares also scored for the Maple Leafs, while Petr Mrazek made 31 saves.

Dylan Larkin had two goals and an assist for Detroit, and Alex Nedeljkovic made 30 saves.

Bunting achieved his hat trick at 11:58 of the third period with a tap-in off a Marner pass. Matthews got the second assist.

Johnny Gaudreau was the hero with the winning goal in overtime and goaltender Jacob Markstrom collected his league-best seventh shutout of the season as host Calgary blanked Vancouver.

Gaudreau’s 17th goal of the season came 29 seconds into the overtime period. Moments after he broke up a Canucks rush, Gaudreau was the trailer on the ensuing odd-man rush when Elias Lindholm dropped a pass for him in the slot.

Gaudreau, who was denied during a second-period, penalty shot attempt, unloaded a low slap shot that found the mark to give the Flames their fourth win in six games and put them back into a wild-card playoff position in the Western Conference standings.

Florida, which rallied from a 4–2 third-period deficit, never led until its last goal. The Panthers got an early goal from Gustav Forsling and third-period tallies from Aleksander Barkov, Mason Marchment and Jonathan Huberdeau.

Atkinson, who took over the team lead with 17 goals, also added an assist for the Flyers, who entered this contest 0–10–3 since winning at Seattle on Dec. 29. Gerry Mayhew scored for the second time in two games and Carter Hart made 37 saves.

Viktor Arvidsson scored twice for Los Angeles, which dropped to 2–0–2 on a six-game road trip. Anze Kopitar scored to tie the score with 38 seconds left in regulation.

Mark Stone scored the game-winning goal in the bottom of the seventh round of the shootout as Vegas defeated host Tampa Bay in its final regular-season meeting.

William Carrier and former Lightning draft pick Brett Howden each notched a goal and an assist for Vegas, which is 5–3–0 all-time against the Lightning.

Corey Perry registered a goal and an assist, and Ross Colton scored. But the Lightning saw their three-game home winning streak end in losing for the second time in eight games (6–1–1).

Leon Draisaitl scored twice to move into a tie for the NHL’s goal-scoring lead and Evander Kane tallied in his debut as Edmonton defeated host Montreal.

Zach Hyman had two goals and an assist, Ryan Nugent-Hopkins had one of each and Derek Ryan also scored for the Oilers, who have won four consecutive games after going 2–11–2 over their previous 15. Goaltender Stuart Skinner made 21 saves.

Josh Anderson and Tyler Toffoli scored for the Canadiens, who have lost five in a row and are 1–7–4 in their past 12 games. Sam Montembeault stopped 10 of 16 shots through two periods before being replaced by Cayden Primeau, who gave up one goal on eight shots.

John Gibson made a season-high 44 saves for visiting Anaheim in a win over Ottawa.

Rickard Rakell and Troy Terry scored for the Ducks, who are 4–0–1 in their past five games. Terry scored his 25th goal of the season to give the Ducks a 2–1 lead at 3:42 of the third period.

Tyler Ennis scored, and Anton Forsberg made 18 saves for the Senators.

Kyle Connor had a goal and an assist and Nate Schmidt also scored for the Jets, who snapped their 0–4–2 winless streak.

Vladimir Tarasenko scored and Ville Husso made 20 saves for the Blues, who suffered just their second regulation loss in their last 17 games at home.

Jordan Martinook and Andrei Svechnikov scored first-period goals, and those held up as Carolina defeated New Jersey in Raleigh, N.C.

Carolina goalie Antti Raanta, playing for the first time since Jan. 1, made 24 saves. His record improved to 6–2–1 this season.

Jesper Boqvist scored for the Devils, who have lost four straight and seven of their past eight games.

Alex Tuch and Peyton Krebs each had a goal and an assist as Buffalo won in Glendale, Ariz., handing Arizona its fifth straight loss.

Tuch has 12 points in 11 games with the Sabres. Craig Anderson made 27 saves for Buffalo in his first game since Nov. 2 (upper-body injury). Kyle Okposo also scored for Buffalo, which was without defenseman Rasmus Dahlin and forwards Victor Olofsson and Rasmus Asplund.

Shayne Gostisbehere scored and Karel Vejmelka made 32 saves for the Coyotes.