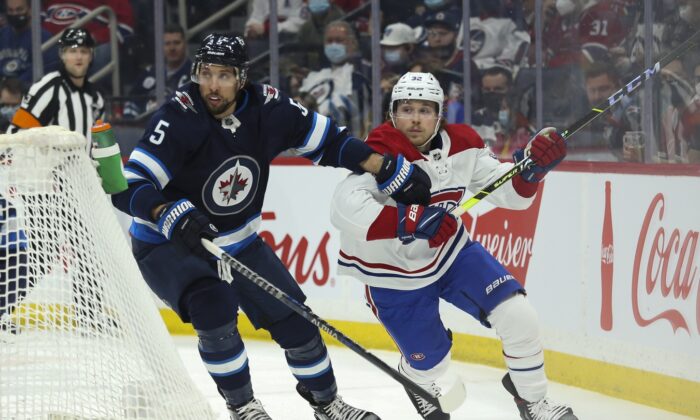 Andrew Copp provided the tiebreaking score late in the second period and Mark Scheifele had two goals and an assist as the Winnipeg Jets overcame blowing a four-goal lead to cool off the visiting Montreal Canadiens with an 8–4 victory on Tuesday.

After Josh Anderson scored Montreal’s fourth straight goal at 4:08 of the second period—capping his first career hat trick—to tie the game at 4–4, Winnipeg eventually regained the form it had shown while scoring on four of its first six shots through the first 9:13 of the contest.

Third-period goals from Scheifele, Pierre-Luc Dubois and Paul Stastny provided a cushion for Winnipeg, which went 3-for-6 on the power play to match its highest-scoring game of the season. The Jets won back-to-back contests for the first time since Feb. 16–17.

Jean-Gabriel Pageau had a goal and an assist, Kyle Palmieri and Ryan Pulock also had goals and Zack Parise had two assists for the Islanders. Ilya Sorokin had 39 saves.

Keegan Kolesar also scored a goal and Jonathan Marchessault and William Karlsson each had two assists for Vegas, which won its 11th consecutive regular-season meeting with the Sharks dating back to the 2019–20 season.

Noah Gregor scored for San Jose, which was playing its sixth game over a 10-day span. Zach Sawchenko stopped 18 of 20 shots after replacing starting goaltender James Reimer, who departed with a lower-body injury after turning aside 10 of 11 shots in the first period.

Brayden Point scored and dished out three assists as Tampa Bay shrugged off a slow start by rallying with five unanswered goals to beat visiting Ottawa.

Nikita Kucherov produced a goal and an assist, and Steven Stamkos scored his 174th career power-play goal to move past Jean Beliveau and Ray Bourque for 30th on the all-time lidt. Corey Perry and Mikhail Sergachev also tallied for the Lightning, and Andrei Vasilevskiy made 25 saves to win his fourth straight game.

Tyler Ennis and Zach Sanford netted goals, but Ottawa fell to 3-6-1 in its past 10 games. Matt Murray stopped 17 of 22 shots.

Connor McDavid and Leon Draisaitl each had one goal and one assist to lift Edmonton past host Philadelphia.

Kailer Yamamoto added one goal for the Oilers. Goaltender Mikko Koskinen made 39 saves to earn his sixth career shutout.

Matthew Tkachuk, Elias Lindholm, Tyler Toffoli, Andrew Mangiapane and Mikael Backlund each had a goal and an assist as Calgary cruised by Minnesota in Saint Paul, Minn.

Johnny Gaudreau added two assists as Calgary beat Minnesota for the second time in four nights as part of a home-and-home set. The Flames have won 12 of their past 13 games. Calgary goaltender Jacob Markstrom stopped 32 of 33 shots to improve to 25-11-5.

Marcus Foligno scored the lone goal for Minnesota, which dropped its fourth game in a row. Wild goaltender Cam Talbot turned aside 22 of 26 shots and fell to 19-12-1.

Patrik Laine’s goal early in the third period proved to be the game-winner as host Columbus edged New Jersey.

Jake Christiansen’s first NHL goal tied the game in the first for the Blue Jackets, who took the lead for good on Oliver Bjorkstrand’s goal later in the period. Boone Jenner gave Columbus its first two-goal lead early in the second before Laine scored his 14th goal in his last 13 games—the most goals in a 13-game span in team history.