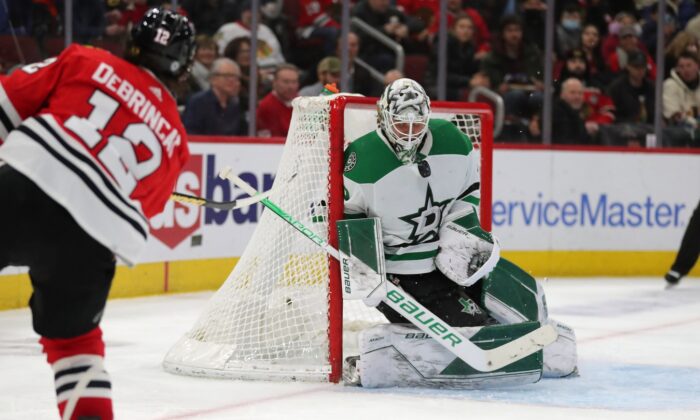 Dallas Stars goaltender Jake Oettinger (29) makes a save on a shot from Chicago Blackhawks left wing Alex DeBrincat (12) during the third period at the United Center in Chicago, on Feb. 18, 2022. (Dennis Wierzbicki/USA TODAY Sports via Field Level Media)
NHL

Jacob Peterson scored in the sixth round of a shootout to back a 34-save shutout from Jake Oettinger as the Dallas Stars stretched their road winning streak to six games with a 1–0 win against the Chicago Blackhawks on Friday night.

After Chicago’s Alex DeBrincat and Dallas’ Jason Robertson traded goals to open the shootout, the netminders settled in, matching respective stellar efforts from regulation and overtime. The Blackhawks’ Marc-Andre Fleury stopped 29 shots for a shutout of his own but still was credited with the loss.

The Stars’ Tyler Seguin had a chance early in overtime that trickled off the crossbar. Oettinger stopped a DeBrincat one-timer on a two-on-one pass from Patrick Kane in the opening minute of the extra session.

Fleury kept the hosts afloat with multiple highlight-reel stops. Perhaps his most impressive save came with 6.5 seconds remaining in the second period, as Fleury sprawled to his left to deny Roope Hintz just outside the crease with a brilliant glove stop.

Mason Marchment had a hat trick for Florida in a win over Minnesota at Minneapolis.

Anthony Duclair and Aaron Ekblad each had a goal and an assist, Carter Verhaeghe added a goal, and Sergei Bobrovsky made 24 saves for the Panthers, who have won two straight following a 14-day gap between games.

Kirill Kaprizov and Mats Zuccarello each had a goal and an assist and Cam Talbot made 29 saves for the Wild, who entered the All-Star break on a six-game winning streak but are 2-3-0 coming out. Minnesota has given up six goals in back-to-back games.

Brady Skjei and Jaccob Slavin collected a goal and an assist apiece and Jesperi Kotkaniemi also scored for the Hurricanes. Sebastian Aho and Martin Necas each registered two assists as Carolina improved to 2-2-2 since the All-Star break. Frederik Andersen stopped 28 of 31 shots.

Luke Kunin, Filip Forsberg, and Tanner Jeannot scored for the Predators, who fell to 0-4-0 since returning to action. Roman Josi assisted on all three goals, and Juuse Saros made 25 saves.