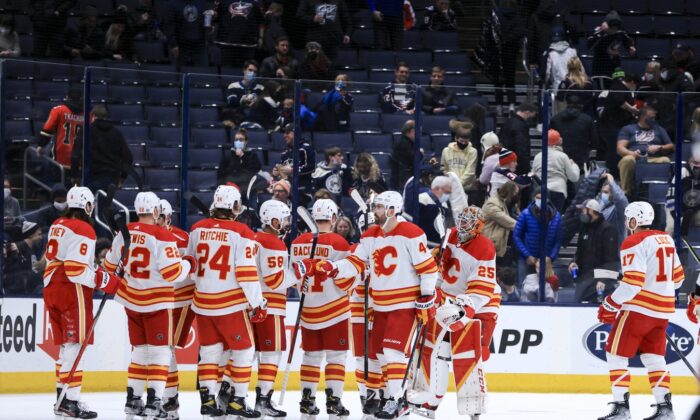 Matthew Tkachuk scored twice and the visiting Calgary Flames took a franchise-record 62 shots on goal in a 6–0 win against the Columbus Blue Jackets on Wednesday night.

Mikael Backlund, Andrew Mangiapane, Elias Lindholm and Erik Gudbranson also scored for the Flames, whose previous single-game record was 59 in a 10–8 win against the Quebec Nordiques on Feb. 23, 1991. The last time a NHL team had as many as 62 shots in a regulation game was March 12, 1989, when the Chicago Blackhawks had 62 in a 6–5 loss to the Pittsburgh Penguins.

Calgary’s Jacob Markstrom made 23 saves for his NHL-leading sixth shutout this season and the 14th of his career.

Johnny Gaudreau finished with three assists for the Flames, who have won their past two games by a combined score of 13–1. Elvis Merzlikins made 56 saves for the Blue Jackets, who have lost three straight games and are 6–15–1 in their past 22.

Daniel Sprong scored and Ilya Samsonov made 26 saves, but the Capitals dropped back-to-back games in regulation for the first time since April 6–8, 2021. Washington fell to 3-6-2 in 2022.

Matthews beat John Gibson to start the second round of the tiebreaker after Toronto’s Jason Spezza and Anaheim’s Trevor Zegras each scored in the first round.

Alex DeBrincat supplied two goals and an assist for the Blackhawks. Sam Lafferty scored his first goal this season and Dominik Kubalik and Brandon Hagel also scored. Hagel added an assist, and Marc-Andre Fleury made 28 saves.

Robby Fabbri and Tyler Bertuzzi each had a goal and an assist while Pius Suter, Moritz Seider and Dylan Larkin added goals for the Red Wings. Detroit pulled goaltender Alex Nedeljkovic (12 saved on 16 shots) for Calvin Pickard (18 saves on 21 shots) after the first period.

Cale Makar scored on a power play at 3:01 of overtime as Colorado erased a two-goal deficit in a win over Boston at Denver to run its franchise-record home winning streak to 17 games.

Brad Marchand scored his team-leading 21st goal and both Charlie Coyle and Jake DeBrusk scored for the Bruins. Ullmark stopped 37 of 41 shots for Boston.