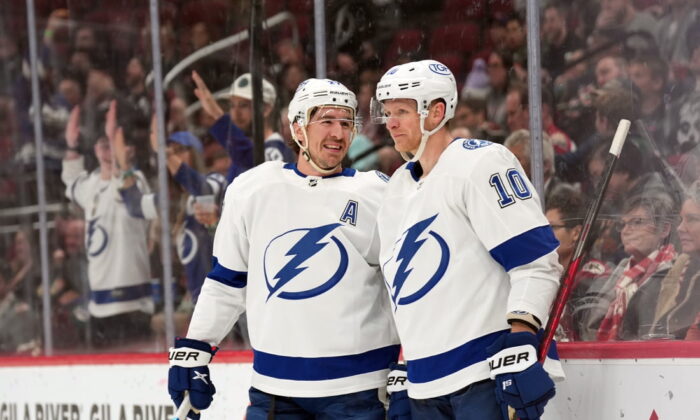 Corey Perry netted his 400th NHL goal as the Tampa Bay Lightning won for the ninth straight time on home ice over the Edmonton Oilers in a 5–3 victory on Wednesday night.

After drawing a tripping penalty, Perry scored on the power play by deflecting a shot by Mikhail Sergachev (two assists) for his 14th goal of the season and a 4–1 lead at 15:24 of the second.

Perry became the 103rd player to achieve the milestone and the ninth active player to reach the mark.

Pat Maroon recorded a goal and a helper, Steven Stamkos netted his 24th and Brayden Point and Nikita Kucherov tallied for Tampa Bay, which is 13–1–2 in its past 16 games at home and has won five straight overall against Edmonton. Winning goalie Andrei Vasilevskiy stopped 27 shots.

Nick Suzuki had two goals and an assist and host Montreal won its fourth straight with a shutout over slumping Buffalo.

Cole Caufield had a goal and an assist for the Canadiens, who are 4–3–0 under interim coach Martin St. Louis. Sam Montembeault made 32 saves to earn his first NHL shutout. Craig Anderson made 25 saves for the Sabres, who lost their fourth straight.

Anderson had to be sharp in the first period as Buffalo struggled in the first half of the opening frame with several turnovers. Five minutes into the period, he robbed forward Laurent Dauphin point blank with a pad save and, with just under four minutes to go, denied Caufield with a sprawling stick save.

Initially not called a goal on the ice, replay quickly confirmed Seguin did score after batting the puck out of mid-air with his stick and over the shoulder of Winnipeg goaltender Connor Hellebuyck (36 saves). Seguin assisted on Denis Gurianov’s tying goal late in the third and Jamie Benn notched a goal and two assists for the Stars, who have won 10 of their last 14.

Mark Scheifele recorded a goal with an assist to snap a three-game point drought and Neal Pionk posted two assists for the Jets, who have lost three in a row. Blake Wheeler also scored for Winnipeg, which is 0–3–3 in its last six games at Dallas.

Viktor Arvidsson’s second goal of the game, a tiebreaking tally with 3:39 left, lifted Los Angeles to a win over Arizona in Glendale, Ariz.

Blake Lizotte also scored and Trevor Moore recorded two assists for the Kings, who have won five of six. Cal Petersen made 17 saves for the victory.

Clayton Keller scored for the fourth straight game, Barrett Hayton added a goal and Scott Wedgewood made 32 saves for the Coyotes, who failed in their attempt to win back-to-back games for the third time this season.

Colorado also got goals from Tyson Jost, Nazem Kadri and Valeri Nichushkin, while Cale Makar, Alex Newhook and Mikko Rantanen notched two assists apiece. Pavel Francouz made 32 saves for the Avalanche, who added to their NHL-best point total by winning for the third time in four games.

Filip Zadina and Robby Fabbri scored for Detroit, which outshot the Avalanche by a 34–31 margin. Moritz Seider and Dylan Larkin both registered two assists and Thomas Greiss stopped 26 shots.