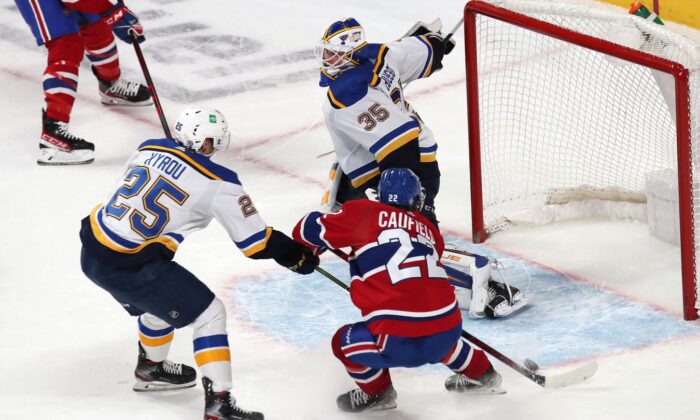 Cole Caufield tied the game with 10 seconds left in regulation and scored the game-winner 2:22 into overtime as the Montreal Canadiens snapped a 10-game losing streak with a 3–2 victory over the visiting St. Louis Blues on Thursday.

Paul Byron, playing in his 500th NHL game, scored the other goal for the Canadiens and Sam Montembeault made 25 saves for Montreal, which was 0-8-2 since its last victory on Jan. 18.

Pavel Buchnevich and Robert Thomas scored, and Husso finished with 27 saves for the Blues.

J.T. Miller scored on a delayed penalty at the 2:39 mark of overtime to give visiting Vancouver a wild win over San Jose.

Quinn Hughes had a goal and an assist and Conor Garland, Brock Boeser, and Juho Lammikko also scored for Vancouver. Elias Pettersson had two assists, and Thatcher Demko made 24 saves to improve to 5-0-0 in his career against the Sharks.

San Jose’s Alexander Barabanov had two assists and forced overtime by scoring with 0.6 seconds remaining in regulation. Timo Meier snapped a six-game goal drought with a pair of power-play goals and an assist for San Jose. Logan Couture also scored and Tomas Hertl added a pair of assists. James Reimer finished with 22 saves.

Josh Morrissey scored the tiebreaking goal at 13:50 of the third period as host Winnipeg rallied from an early two-goal deficit to defeat Seattle.

Blake Wheeler and Kyle Connor each had a goal and an assist, and Dominic Toninato and Pierre-Luc Dubois scored for Winnipeg. Backup goaltender Eric Comrie, making his first start since Jan. 29, made 20 saves for the Jets, who are 4-1-1 since the All-Star break.

Marcus Johansson and Jordan Eberle each had a goal and an assist, and Vince Dunn also scored for Seattle, which has lost three of four since the break. Philipp Grubauer finished with 24 saves.

Pius Suter scored the winning goal in the sixth round of the shootout to give visiting Detroit a win against New York.

Suter scored to start Round 6, and Thomas Greiss stopped Filip Chytil’s wrist shot for the win. Detroit’s Lucas Raymond and New York’s Mika Zibanejad each scored in the first round of the tiebreaker.

Greiss made 37 saves through overtime, and Troy Stetcher and Dylan Larkin scored for Detroit, which ended New York’s three-game winning streak. K’Andre Miller and Zibanejad scored for the Rangers, and Igor Shesterkin finished with 31 saves.

Edmonton’s Evander Kane, Derek Ryan, Warren Foegele, and Zach Hyman each had a goal and an assist, and Jesse Puljujarvi also tallied. Mike Smith made 27 saves for the Oilers, who have won four straight since Dave Tippett was fired last week and replaced by interim coach Jay Woodcroft.

Trevor Zegras and Sonny Milano each had a goal and an assist, Adam Henrique scored and John Gibson stopped 34 shots for the Ducks, who have lost four in a row (0-3-1).

Morgan Rielly and Auston Matthews each had a goal and an assist, and Toronto defeated visiting Pittsburgh.

David Kampf and Michael Bunting also scored for the Maple Leafs, who have won their past two games. Mitchell Marner had two assists, and Jack Campbell made a season-best 45 saves.

Evgeni Malkin scored and Tristan Jarry finished with 25 saves for the Penguins, who had their four-game winning streak end.

Hathaway also contributed an assist while John Carlson added a goal and an assist for the Capitals. Washington’s Michal Kempny and Joe Snively each netted a goal, and Nic Dowd and Carl Hagelin chipped in with two assists apiece.

Gerry Mayhew led Philadelphia with two goals while Travis Sanheim had one goal and one assist. Martin Jones stopped 20 shots for the Flyers, who have dropped four in a row (0-3-1).

Noah Dobson, Mathew Barzal, and Brock Nelson scored in the third period for New York, which earned a rare win against a playoff contender by beating Boston in Elmont, N.Y.

Jean-Gabriel Pageau scored in the second period for the Islanders, who snapped a three-game losing streak and improved to 2-0-0 against the Bruins, whom New York beat in a heated six-game, second-round Eastern Conference series last spring.

The Islanders, who are 16 points behind the Bruins in the race for the final Eastern Conference wild-card spot, are 2-16-2 against the 15 other teams that entered Thursday in playoff position.

Austin Watson redirected the puck in the net for the tiebreaking goal with 9:11 left and visiting Ottawa rallied to beat Buffalo.

Zach Sanford posted his eighth goal, Brady Tkachuk added an empty-netter and Anton Forsberg made 23 saves for the Senators, who have won two of three against the Sabres this season.

Craig Anderson, the longtime Senator and that club’s all-time leader with 202 victories, stopped 25 shots for Buffalo. It marked the first time Anderson had faced Ottawa, where he spent parts of 10 seasons since leaving as an unrestricted free agent in October 2020.

Patrik Laine had a hat trick, Boone Jenner scored a goal and had two assists, and visiting Columbus outscored Chicago to cap a 4-1-0 road trip.

Laine’s hat trick was the ninth of his NHL career and extended his points streak to eight games. Jenner assisted on two of Laine’s goals and scored his team-high 20th goal of the season. Jenner also leads the Blue Jackets with 37 points.

Ryan Carpenter and Philipp Kurashev each had a goal and an assist for the Blackhawks, who are 3-7-2 in their last 12 games.