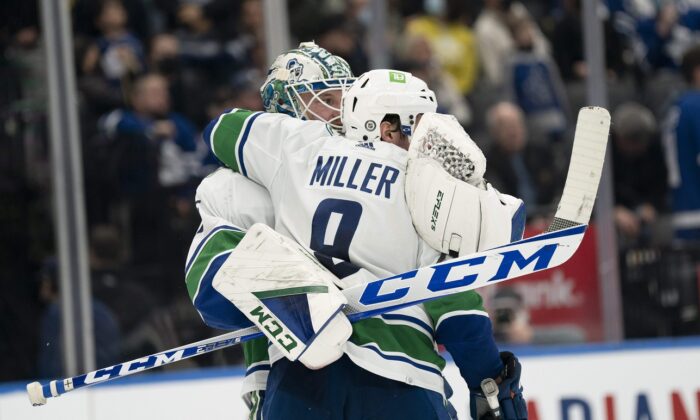 Vancouver Canucks goaltender Thatcher Demko (35) celebrates the win with center J.T. Miller (9) at the end of the third period against the Toronto Maple Leafs at Scotiabank Arena in Toronto on March 5, 2022. (Nick Turchiaro/USA TODAY Sports via Field Level Media)
NHL

Alex Chiasson scored the go-ahead goal early in the third period and the visiting Vancouver Canucks came back to defeat the Toronto Maple Leafs 6–4 Saturday night.

The Canucks scored three times in the third period to overcome a 4–3 deficit.

Travis Hamonic, J.T. Miller, Brock Boeser and Tanner Pearson each had a goal and an assist for the Canucks, who completed a four-game roadswing with three wins. Tyler Motte also scored and Bo Horvat added two assists.

Auston Matthews scored two goals and John Tavares added a goal and an assist for the Maple Leafs, who have lost two in a row. Nicholas Robertson also scored. Jack Campbell made 23 saves for Toronto.

Nick Schmaltz set an Arizona franchise record with seven points, scoring two goals and assisting on five others in a win against visiting Ottawa.

Clayton Keller had two goals and two assists, Shayne Gostisbehere had a goal and three assists, and Lawson Crouse put the Coyotes ahead to stay with 13:03 remaining in the third period after the Coyotes blew a four-goal lead. Scott Wedgewood made 41 saves for Arizona, which has won back-to-back games and three of four.

It was the first time any NHL player scored more than six points in one game since Sam Gagner, then with the Edmonton Oilers, had eight (four goals, four assists) against the Chicago Blackhawks on Feb. 2, 2012.

Robby Fabbri and Tyler Bertuzzi scored for Detroit, which has lost four of its past five games.

Nick Suzuki had a goal with two assists as visiting Montreal continued its recent run of success with a victory over Edmonton.

Cole Caufield and Brendan Gallagher each recorded a goal with an assist for the Canadiens, who have an Eastern Conference-low 37 points but have won seven of eight. Sam Montembeault made 28 saves for Montreal, which is 7–4–0 since Martin St. Louis took over as head coach last month.

Meanwhile, Evander Kane and Ryan McLeod each had a goal for Edmonton, which is mired in a 2–4–1 rut. The Oilers are 5–11–0 at home after winning nine of their first 10 there.

Michael McCarron had two goals and two assists as visiting Nashville matched the biggest margin of victory in its history by defeating San Jose.

Juuse Saros made 20 saves for his third shutout of the season and the 17th of his NHL career. Matt Luff had two goals and an assist, Matt Duchene scored two goals, and Roman Josi had four assists and finished plus-6 for Nashville, which leapfrogged the Dallas Stars to move into the first wild-card spot in the Western Conference.

David Pastrnak scored the only goal of the shootout to give Boston a win against host Columbus.

Pastrnak began the third round of the tiebreaker by beating Columbus goalie Elvis Merzlikins with a wrist shot, and Boston’s Jeremy Swayman stopped Jakub Voracek to give Boston a 5–1–0 record on its six-game trip.

Jake DeBrusk, Erik Haula, Craig Smith and Patrice Bergeron scored in regulation for Boston, and Swayman made 20 saves before stopping all three attempts in the shootout.

Ilya Sorokin made 27 saves, allowing only a late goal by Robert Thomas. New York’s Cal Clutterbuck preserved the win by blocking a shot an instant before the final horn.

Jordan Binnington made 18 saves for the Blues, who have lost the first two games in a three-game swing through the New York metropolitan area that ends Sunday against the New Jersey Devils.

Cam Atkinson scored two goals, including the game-winner, as Philadelphia rallied in the third period to defeat visiting Chicago.

Oskar Lindblom and Derick Brassard each scored for the Flyers, Joel Farabee contributed three assists and goalie Martin Jones made 26 saves. Atkinson’s team-high 20th goal of the season, a shot through traffic at 8:18 of the third period, broke a 3–3 tie.

Alex Ovechkin had a goal and two assists as host Washington defeated Seattle.

Ovechkin’s power-play goal on a slap shot from the top of the left faceoff circle just 47 seconds into the third period gave the Capitals a 4–2 lead and was the 764th of his NHL career, pulling him within two of Jaromir Jagr for third in league history. Only Wayne Gretzky (894) and Gordie Howe (801) have scored more.

Conor Sheary scored twice, including an empty-netter at 17:50 of the third, and Tom Wilson and Dmitry Orlov also tallied for the Capitals. Joonas Donskoi and Colin Blackwell scored for Seattle, which has lost eight of its past nine games.