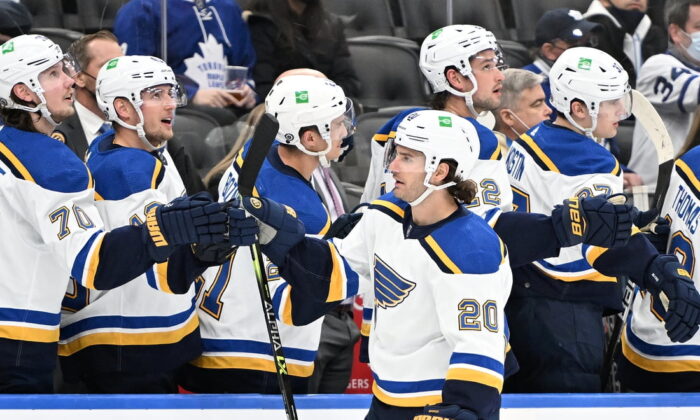 St. Louis Blues forward Brandon Saad (20) celebrates with team mates at the bench after scoring against the Toronto Maple Leafs in the third period at the Scotiabank Arena in Toronto, on Feb. 19, 2022. (Dan Hamilton/USA TODAY Sports via Field Level Media)
NHL

Brandon Saad scored his 200th career goal to break a tie in the third period, and the visiting St. Louis Blues went on to defeat the Toronto Maple Leafs 6–3 Saturday night.

Jack Campbell made 28 saves for Toronto.

Elias Lindholm had a goal and an assist as host Calgary extended its winning streak to nine games, handing expansion Seattle its third straight defeat.

Matthew Tkachuk also scored and goaltender Jacob Markstrom made 22 saves for the Pacific Division-leading Flames, who have outscored opponents 39–14 during the streak.

Calle Jarnkrok scored for cellar-dwelling Seattle, and Philipp Grubauer stopped 35 of 37 shots. Lindholm, who scored for the seventh straight game, snapped a 1–1 tie at 7:31 of the third period.

Adam Henrique and Nicolas Deslauriers had two goals each to help visiting Anaheim end a four-game losing streak with a win against Vancouver.

Troy Terry had a goal and an assist, Trevor Zegras had three assists, and John Gibson had 16 saves and an assist for the Ducks, who won for the first time since Jan. 29.

Elias Pettersson had a goal and two assists, and Tanner Pearson, Conor Garland and Quinn Hughes each had a goal and an assist for the Canucks, who had won three of four coming out of the All-Star break.

Mikko Rantanen and Nathan MacKinnon each had a goal and an assist, while Darcy Kuemper stopped 29 shots, as visiting Colorado beat Buffalo.

Nazem Kadri, J.T. Compher and Alex Newhook also had goals for the Avalanche, who swept the season series. Colorado won for the fourth time in its past five games.

Tage Thompson recorded his first career hat trick, Jeff Skinner had two assists and Dustin Tokarski had 31 saves for the Sabres, who lost for the fifth time in their past seven games (2–4–1).

Connor McDavid took over the NHL points lead with a goal and two assists as Edmonton won its fifth straight game, defeating host Winnipeg in a matinee.

The Jets’ offense had scored at least five goals in three of the past four games, but only got tallies from Adam Lowry and Kyle Connor. Goalie Connor Hellebuyck stopped 36 shots as Winnipeg finished its four-game homestand 2–2–0.

David Pastrnak scored 2:42 into overtime to lift visiting Boston to a victory over Ottawa.

Taylor Hall skated around the perimeter before setting up Pastrnak’s one-timer from the top of the left circle. The goal was Pastrnak’s team-leading 25th of the season and snapped a four-game point drought.

Jake DeBrusk and defenseman Brandon Carlo each scored a goal, and Jeremy Swayman made 29 saves for the Bruins, who have won all three meetings against Ottawa this season. Ottawa’s Tim Stutzle scored a goal while competing in his 100th career NHL game. Defenseman Nick Holden also tallied.

Drew Doughty and Adrian Kempe each registered two goals and an assist to help visiting Los Angeles rally from a 3–1 second period deficit for a win against Arizona.

It was Kempe’s second straight two-goal game. Trevor Moore also scored for the Kings, who have won four of five, and have points in eight of their past nine games (6–1–2). Anze Kopitar had three assists and Cal Petersen made 20 saves.

Anton Stralman, Lawson Crouse, and Clayton Keller scored for the Coyotes, who are 2–9–0 over their past 11 games. Karel Vejmelka made 34 saves for Arizona, which was playing its first game since Feb. 11.