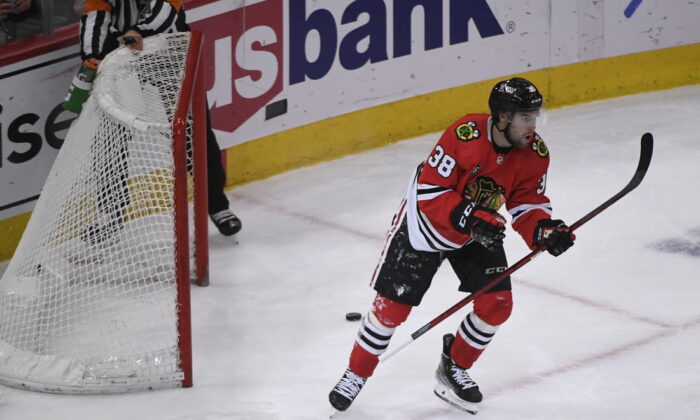 Chicago ended a three-game skid overall while earning its first victory at the United Center since Jan. 15. New Jersey lost for the third time in four games, as they were outscored 4–1 over the game’s final 5:56.

Kirby Dach and Ryan Carpenter scored 41 seconds apart late in the third period to put Chicago ahead 6–4. Kane and Hagel each cemented their hat tricks with empty-net goals.

Special teams boosted the Blackhawks, who finished 3-for-4 on the power play while killing two penalties. Kane added an assist for a four-point night, and Caleb Jones had two assists.

Nino Niederreiter recorded a goal and an assist and Frederik Andersen stopped 19 shots as Carolina rolled past Columbus at Raleigh, North Carolina.

Jordan Staal, Teuvo Teravainen, and Vincent Trocheck also scored for the Hurricanes. Ten of Andersen’s saves came in the final period in picking up his third shutout of the season and the 22nd of his career.

The game marked pretty much a reversal of Columbus’ 6–0 romp in the same building Jan. 13. In this latest matchup, Carolina finished with a 50–19 edge in shots on goal, aided by a 38–9 advantage through two periods. The Blue Jackets had a four-game winning streak snapped.

Jake Walman, Colton Parayko and Brayden Schenn also scored for the Blues, who extended their points streak to six games (5–0–1). Ivan Barbashev had three assists, Justin Faulk had two helpers, and Ville Husso made 35 saves to earn the victory.

Kyle Okposo had a goal and an assist for the Sabres, who lost their fifth straight game. Tage Thompson and Dylan Cozens also scored, and Dustin Tokarski made 18 saves.

Nick Schmaltz scored two goals and Scott Wedgewood made 43 saves to lead host Arizona to a victory over Vegas in Glendale, Ariz.

Shayne Gostisbehere also scored for Arizona, which avenged a 7–1 loss to the Golden Knights in the first meeting between the two teams on Dec. 3.

William Carrier scored for Vegas, which lost for the fourth time in the last five games. Laurent Brossoit finished with 29 saves.

Anze Kopitar and Carl Grundstrom also scored goals while Jonathan Quick made 24 saves as the Kings won their sixth consecutive road game and came out on top for the sixth time in their last seven contests.

Troy Terry scored a goal for the Ducks while John Gibson made 16 saves as Anaheim lost for the fifth time in its last seven games. Gibson was replaced late in the second period by Anthony Stolarz, who stopped all 12 shots he faced.

Gabriel Landeskog scored three goals for his second hat trick of the season and fifth of his career, Nathan MacKinnon had two goals, and Colorado rallied to beat visiting Winnipeg in Denver.