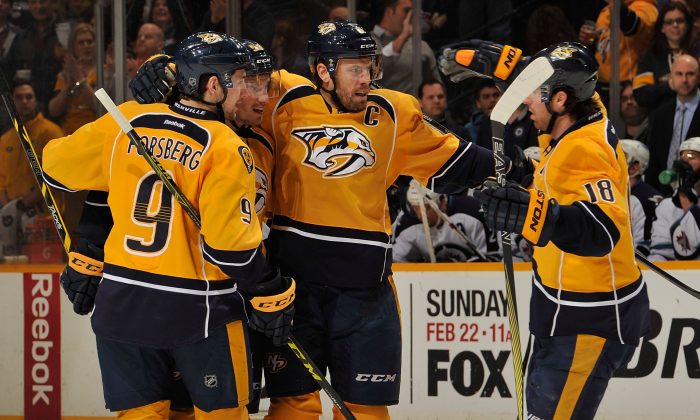 Filip Forsberg (L) and James Neal (R) of the Nashville Predators congratulate teammate Shea Weber on scoring a goal against the Winnipeg Jets during the first period of a game at Bridgestone Arena on February 12, 2015 in Nashville, Tennessee. (Frederick Breedon/Getty Images)
HK Ice Hockey

The 10 best of the NHL may soon include the Kings, who’ve won seven straight games, but as of yet they don’t have the résumé to stack up with these other teams. Here they are:

1. Nashville Predators (40–13–7, 87 points): Nashville goalie Pekka Rinne continues to rank among the leaders in wins (first with 34), save percentage (second at 93.1), and goals allowed average (second at 2.01) and is a big reason they’re having a great season.

2. Tampa Bay Lightning (37–19–6, 80 points): The Lightning just finished up a five-game road trip where they went a respectable 3–2–0. Center Steven Stamkos scored three goals and added an assist during the trip.

This week: versus Chicago (Friday), at Florida (Sunday). Previous: 3

3. St. Louis Blues (38–17–4, 80 points): The Blues are tied, along with Nashville and the NY Rangers, for the biggest scoring differential in the NHL (plus 40). Right-winger Vladimir Tarasenko is a major reason why. The 23-year-old is the only player in the league to rank in the top five in both scoring (59 points) and in plus/minus at plus 28.

This week: versus Montreal (Tuesday), at Winnipeg (Thursday), at Edmonton (Saturday), at Vancouver (Sunday). Previous: 2

4. Montreal Canadiens (38–16–5, 81 points): If defense wins championships, Montreal is in the driver’s seat. With goalie Carey Price leading the way, the Canadiens have allowed the fewest goals in the NHL this season (131) by a long ways.

This week: at St. Louis (Tuesday), at Columbus (Thursday), versus Toronto (Saturday). Previous: 5

5. New York Rangers (36–16–6, 78 points): The Rangers have proved to be a resilient bunch without the services of goalie Henrik Lundqvist. In the 10 games since he went down with a neck injury, New York has gone 7–1–2.

This week: versus Calgary (Tuesday), versus Arizona (Thursday), at Philadelphia (Saturday). Previous: 10

The Rangers have proved to be a resilient bunch without the services of goalie Henrik Lundqvist.

6. Anaheim Ducks (37–16–7, 81 points): The Ducks have been the ultimate road warriors this season, with a league-best 18–8–4 record, including three straight wins. Goalie Frederick Andersen is fifth in the league in wins with 29, despite not playing since late-January with what’s being termed an upper-body injury.

This week: versus Detroit (Monday), versus Ottawa (Wednesday), versus Los Angeles (Friday), at Dallas (Sunday). Previous: 7

7. New York Islanders (39–20–2, 80 points): Islander center John Tavares has picked up 11 points over the last six games—including a 2-goal, 2-assist effort against Columbus on Valentine’s Day. The first overall pick of the 2009 NHL Draft is now fourth in points with 62.

8. Detroit Red Wings (33–14–10, 76 points): With a 3–8 record in shootouts the Red Wings are one of the worst in the league, trailing only Los Angeles (1–7) and Boston (2–6). Still, they have one of the overall better records in the league, thanks to an offense that averages 2.93 goals per contest—sixth-best in the NHL.

9. Pittsburgh Penguins (34–17–9, 77 points): NHL star Sidney Crosby has racked up a trio of assists over the past two games and is now in third in the league in assists with 42, while his 61 points overall have him tied with Alexander Ovechkin for fifth.

This week: at Washington (Wednesday), versus Columbus (Sunday). Previous: 9

10. Chicago Blackhawks (35–20–5, 75 points): The Blackhawks are third in the league in fewest goals allowed at 2.35 per game, yet have lost three straight games and five of seven overall. Patrick Kane has just one point in his last games, but still leads the league in points (along with Washington’s Nicklas Backstrom) with 64.

This week: versus Florida (Tuesday), at Florida (Thursday), at Tampa Bay (Friday). Previous: 4