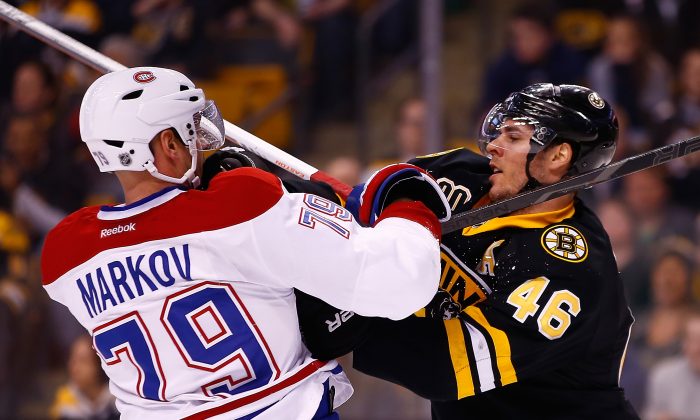 Since the Boston Bruins are arguably the favorite in either conference in this year’s NHL playoffs, the question for the Montreal Canadiens—who prepare to face the Bruins in the second round—becomes: What are our chances?

Historically, the picture has been brighter for the Habs. The two teams have met 33 times in postseason play before 2013–14 with Montreal taking 24 of those series including 18 consecutively between 1946 and 1987.

There have been four clashes in the previous seven years with Boston winning the last two, including their 2011 triumph that culminated in a Stanley Cup championship.

The Bruins and Canadiens have met in the playoffs more than any other combination of teams in any major sport in North America. That includes the Yankees–Red Sox and Celtics–Lakers rivalries. To say these teams are familiar with one another is an understatement.

“We don’t like each other,” said Montreal forward Lars Eller to the media Monday. “That’s no secret.”

The Canadiens are coming off a four-game sweep of the Tampa Bay Lightning, while the Bruins completed a convincing five-game disposal of the Detroit Red Wings.

Three of the four regular season meetings between Boston and Montreal ended in Canadiens victories. But Detroit also won three of four meetings with Boston in the regular season, and they’re on the golf course now.

Montreal coach Michel Therrien, perhaps sensing the opportunity for rust to settle in, simulated a game-day experience for his team, including a morning skate Monday followed by a scrimmage later in the evening against AHL players from the Hamilton farm system.

Bruins coach, and former Habs bench boss, Claude Julien sent an indirect message to his opponents Monday with an assessment of his team’s play against the Red Wings.

“We play a heavy game,” he told the Boston Globe. “So it’s probably good on [Detroit’s] end to see how the playoffs are played.”

A snapshot of this upcoming series would say that it will be the brawn of the Bruins against the speed and tenacity of the Canadiens. Montreal’s Josh Gorges, for one, will not argue that point.

Therrien’s one change to his lineup will be the scratching of Michael Bournival in favor of the heavier and “brawn-ier” Travis Moen. But the Canadiens have much more in their arsenal than to simply try and match Boston’s physicality.

Carey Price has had a career year in 2013–14 with his second-most victories (34) and his best-ever numbers in save percentage and goals against average (.927 and 2.32 respectively). And he also backstopped Canada to an Olympic gold medal.

In addition to the skills provided by Max Pacioretty, Tomas Plekanec, and P.K. Subban, it is the recent acquisitions made by general manager Marc Bergevin that have given life to this Montreal group, which has largely been the same for many seasons.

Pacioretty spoke to the CBC about the ways in which Thomas Vanek has him re-thinking how to play his game.

“I’ve never seen anyone make the decisions [Vanek] makes,” he said. “He’s basically thinking, ‘What do guys think I’m going to do with the puck right now?’ and he does the opposite of it.”

Then there is postseason marvel Daniel Briere. The forward who couldn’t find his place in the lineup in the latter stages of his time in Philadelphia, continues to make his mark come playoff time.

Briere has 111 career playoff points in 112 games, including two in four games against the Lightning while playing on the fourth line. That per game average is markedly different from his regular season numbers—684 points in 916 games.

What are the Canadiens chances against the Bruins?

If Price outplays Rask, if the speed and skill in their lineup dominate Boston’s physicality, and if their new acquisitions can add their own flavor to this well-cooked rivalry, then the Habs can give the Bruins a push that the Red Wings didn’t.

Though the series will begin in Boston, it may take the Habs bringing along a few ghosts of the past along on the road trip in order to have a fighting chance against one of the toughest and deepest teams in the NHL.

Joe Pack has written for TheHockeyWriters.com, is a member of the Society for International Hockey Research and has his own blog at www.upperbodyinquiry.com. Follow him on Twitter @JoePack.